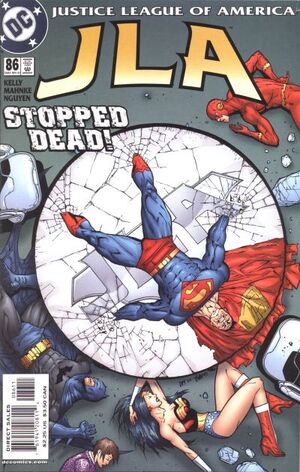 Superman has been attacked by an unknown force, and the rest of the League soon come under attack as well, and are forced to evacuate their lunar headquarters to avoid the Martian intelligence which wishes them harm. Vandal Savage tells them how he encountered this being many millennia ago, when it killed his tribe before he defeated it. The League decide that to find out more about this being, they must question the White Martians imprisoned in the Phantom Zone; Batman has an alternative plan, but will not share it due to the involvement of a telepath in the situation. Fearing that Fernus, the being they face, may somehow be the Martian Manhunter, the team unlock the entrance to the Phantom Zone, only to find that Fernus has already cut a swathe through the aliens.

Retrieved from "https://heykidscomics.fandom.com/wiki/JLA_Vol_1_86?oldid=1437009"
Community content is available under CC-BY-SA unless otherwise noted.