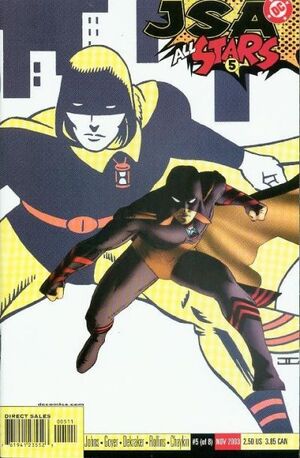 Appearing in "An Hour at a Time"Edit

Synopsis for "An Hour at a Time"Edit

In Long Island, New York, Rick Tyler meets with his mother at Pete's Cafe. His mother remarks that she's proud he's re-engineered Miraclo. Rick suddenly receives a vision about a man committing suicide in an hour. He spots the building across the street and sprints to stop the tragedy.

Upon arriving, the building attendent informs Rick the elevator is out, so he'll have to take the 88 flights of stairs. Rick activates his Miraclo and sprints to the top.

He arrives just in time to speak to the man about to jump. Rick realizes he's been in denial about his drug addiction over the years. The man insists he has nothing to live for and has never helped anyone so he leaps off the building. Rick grabs him right as his powers run out. They both dangle over the edge of the building. The man realizes he never meant to hurt anyone else and assists in helping them both pull themselves up.

Retrieved from "https://heykidscomics.fandom.com/wiki/JSA:_All_Stars_Vol_1_5?oldid=1437842"
Community content is available under CC-BY-SA unless otherwise noted.