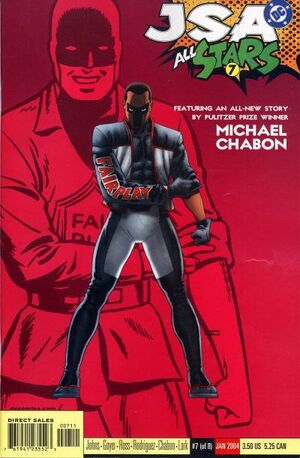 At a cemetery, Michael Holt thinks about the loss of his wife, but struggles with the idea of an afterlife and belief in religion. When he realizes he's being tailed, he ducks into an alley and uses his T-Spheres to subdue the men. He pulls out their IDs and learns they are working for the DEO.

Later, Mr. Terrific surprises Director Bones at his office. Bones informs him that it's his job to keep tabs on them as the new most powerful organization on earth. He also informs him that Paula was six weeks pregnant when she died.

Michael revisits Paula's grave and thinks that if there is an afterlife, at least she isn't alone.

Appearing in "The Strange Case of Mr. Terrific and Doctor Nil"Edit

Synopsis for "The Strange Case of Mr. Terrific and Doctor Nil"Edit

Ned Slone arrives drunk to his brother's house. Terry Sloane immediately asks him how much money he needs. Ned is insulted and leaves pretending to not need the money. Terry notices he has pawned his jacket for money as he leaves and pleads for him to come to his annual Christmas party.

Ned continues his drunken stupor as he borrows money from bookies and gambles it away. He falls asleep in the alleys and lets the snow cover him.

The next day, Ned shows up dressed as Doctor Nil, a mirror reverse of Terry as that is how he feels. While mingling at the party, Ned rubs shoulders with one of Terry's ex-employees. He realizes he's planning on killing Terry. He indirectly convinces the man to give up his plans and go home. Terry walks over and asks who he was talking to and Ned tells him about the man's plan. Terry hugs Ned for saving his life and reveals he's repurchased the jacket he pawned. Ned smiles as he knows he pawned the jacket in another city.

Retrieved from "https://heykidscomics.fandom.com/wiki/JSA:_All_Stars_Vol_1_7?oldid=1437844"
Community content is available under CC-BY-SA unless otherwise noted.