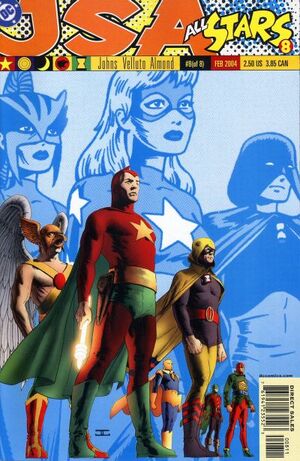 Appearing in "And Justice for All"Edit

Synopsis for "And Justice for All"Edit

While they have each prepared individually, they discuss not feeling ready to face Legacy. They feel they still carry emotional baggage to overcome. Suddenly, the Specter arrives to take them to Legacy. Doctor Fate (Hector Hall) realizes something is wrong. He reveals the Legacy has been masquerading as the Specter.

Fate hands his helmet to real Specter who then frees the imprisoned JSA members. Specter takes vengeance on the wizard.

The JSA grow concerned over his actions. They feel he should be Spirit of Redemption and this is out of character for his role.

Jay Garrick thinks about how the young JSA did well. They provided inspiration, even to the old-timers.

Retrieved from "https://heykidscomics.fandom.com/wiki/JSA:_All_Stars_Vol_1_8?oldid=1437845"
Community content is available under CC-BY-SA unless otherwise noted.