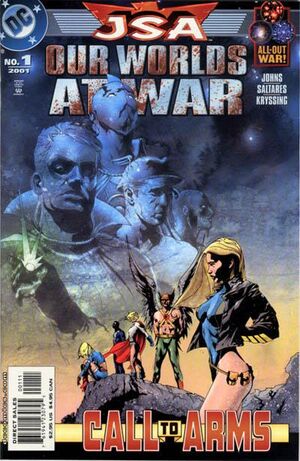 Call in the reserves, Jay. All of them. This is war.

Lex Luthor contacts the JSA for a mission against Imperiex which requires all their reserves and then some. Their task is to sever the link between Imperiex's huge ship and his probes to prevent him creating more of them. When they arrive there, they discover that it is being run off the planet Daxam and that they must make saving its people a key part of their mission. Sand divides them into groups led by himself, Sentinel, the Patriot and Hawkman in order to accomplish different aspects of their task. Hawkman's group soon runs into aggressive machines - in the midst of the battle against them, the Shining Knight slices into one of the ship's unstable fuel cells, which Hawkgirl disrupts further, causing a massive explosion which is more than adequate as a diversion for Sand's covert group, who begin to disrupt Imperiex' communications. The Patriot's group, meanwhile, runs into difficulties on Daxam - the dormant bodies of the Daxamites are better guarded than they thought, and one of their guardians slices into the Ray, to the rest of the group's horror. Black Condor exercises his healing ability on the Ray, who has reverted from energy to human form, and Damage, with the help of the others, is able to destroy the rest of the attacking machinery. The Daxamites freed, Sentinel's magical group focus their energy through Jade's body - their combined powers are enough to send the planet home, whereupon the ship begins to break apart.

When Sand reports in to Luthor, the President is astonished to learn that not only did they destroy the entire ship, but they got out without a single casualty.

Retrieved from "https://heykidscomics.fandom.com/wiki/JSA:_Our_Worlds_At_War_Vol_1_1?oldid=1437847"
Community content is available under CC-BY-SA unless otherwise noted.