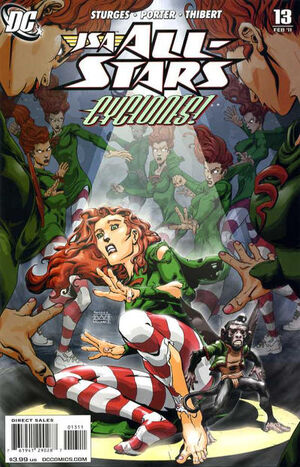 A de-powered Maxine and two powered dopplegangers try to stop her lab-mate Tim from wrecking the city. They need help, but the rest of the JSA All-Stars are on Qorath VI. The three Maxines head back to Star-K Ranch to be greated by another nine Maxines! They all meet with Roxy, who theorizes that the nanites in Maxine's blood underwent a "rapid evolution" to save themselves when Maxine was in the hospital. Roxy further speculates that the nanites went and replicated their entire habitat - Maxine - to ensure their survival. Maxine concludes that when she sneezed at the Hospital in Turkey, that the nurse must have been infected, eventually turning her into a "clone" of Maxine, and spread from there. Roxy and Maxine decide that in order to restore everyone, they need to recover Maxine's original nanites from the guy that's carrying them. Meanwhile, on X-Anathraxis, Citizen Steel and the All-Stars fights the Jek D'Gronn to save the city, and King Chimera vows that if they live, he will tell Maxine how he feels about her. Back on Earth, the Maxine All-Stars find a hurricane containing Tim, and they try to use how he feels about Maxine to convince him to give-up his newfound power over wind. However, Tim refuses to relenquish the nanites he repaired due to some prior little crush. Team Maxine works out an elaborate plane, and Maxine-Prime quickly embraces Tim to execute it. Tim pleads that they do not take away his powers, but they do anyway. They get back to HQ and turn everyone back to themselves just in time for the triumphant JSA All-Stars to return from their space adventures, whom upon finding a dozen people dressed like Cyclone in their HQ ask "What the hell?!" Wrapping things up, King Chimera kisses Maxine, and Roxy reveals to Power Girl that the nanites screwed up, and someone else is walking around with Maxine's original bones, and Maxine has someone else's...

Retrieved from "https://heykidscomics.fandom.com/wiki/JSA_All-Stars_Vol_1_13?oldid=1437684"
Community content is available under CC-BY-SA unless otherwise noted.