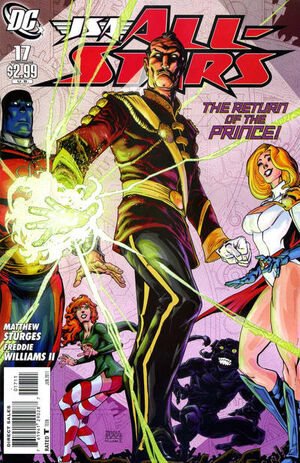 Appearing in "A Better World, Part 1 of 2"Edit

Synopsis for "A Better World, Part 1 of 2"Edit

Prince, a crazed escapee from Thomas High Security Metahuman Psychiatric Hospital, finds his team, the JSA All-Stars, and tells them that Doctor Hate has altered history. The All-Stars have no clue who the Prince is. Meanwhile, Roxy is dealing with the human body that she has occupied, and the moral issues it brings.

Retrieved from "https://heykidscomics.fandom.com/wiki/JSA_All-Stars_Vol_1_17?oldid=1437688"
Community content is available under CC-BY-SA unless otherwise noted.