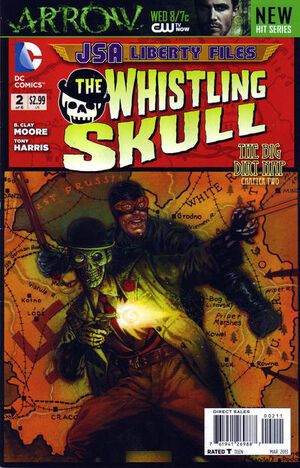 The boys used to call me a freak. They used to hit me because they didn't like me.

Whistling Skull and Knuckles continue to investigate the mysterious disappearances and happenings in Switzerland. They decide to take a break and see a traveling circus. The main attraction are the side-show freaks collectively known as Der Karneval. Knuckles flashes back to his traumatic childhood of being bullied and called a freak, and is unable to continue watching the show. They leave and decide to return to the investigation. While cruising around in the Battlewagon, Knuckles spots a few boys running in terror. The stop the Battlewagon and manage to grab a boy for long enough to determine that "they have him." Whistling Skull and Knuckles go to investigate. They find a figure that resemble Der Flock from Der Karneval, but they don't make the connection just yet. Whistling Skull shoots at the mysterious umbra. It seems that he has hit it, but it keeps running and only a small, strange, distorted humanoid creature remains at the spot where the shadow-like creature was shot.

Retrieved from "https://heykidscomics.fandom.com/wiki/JSA_Liberty_Files:_The_Whistling_Skull_Vol_1_2?oldid=1437731"
Community content is available under CC-BY-SA unless otherwise noted.