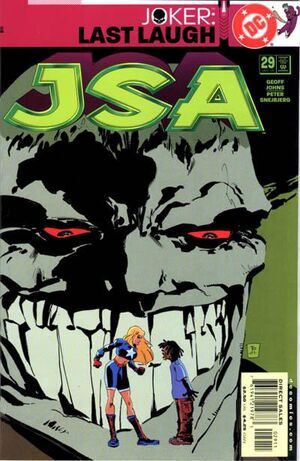 Sentinel, Wildcat, and Jay head out for the night to find their missing teammates. They tell Courtney and Jakeem they're in charge while they're gone. Alex Montez enters the room dressed for Halloween while Courtney and Jakeem find it lame. They hear a sudden noise and head outside to investigate.

They find the Statue of Liberty head sitting outside their building with a joker face painted on it. They are suddenly attacked by Soloman Grundy. Courtney is frozen with fear as she hesitates engaging. She recalls Grundy killed the first Star-Spangled Kid years ago. Soloman steals Jakeem's pen and retreats into the subway tunnels below. Courtney orders Jakeem to lay low as he's useless without the Thunderbolt. Jakeem presses on as he feels a need to save his friend.

In the subway, Courtney knocks the pen loose but it falls behind floor gates. It is out of reach for Jakeem but as he wills to reach it, the pen suddenly jumps into his hand. Jakeem summons the Thunderbolt to fry Soloman but remains confused as to how he caused the pen to move. They discuss their reference for their predecessors. He wishes the previous Johnny didn't have Alzheimer's.

Meanwhile in Keystone City, the original Johnny makes a full recovery from Alzheimer's and leaves the facility.

Retrieved from "https://heykidscomics.fandom.com/wiki/JSA_Vol_1_29?oldid=1437774"
Community content is available under CC-BY-SA unless otherwise noted.