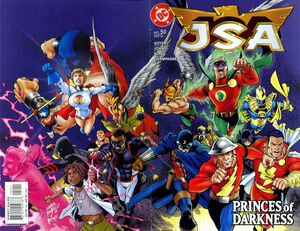 That's why the Justice Society is so important to me. To Jay and W:C:DC:Ted Grant (New Earth)Ted and Carter. Jay and his wife couldn't have children of their own. Ted lost his son. Carter neglected his. And I... I was never even there for mine. WE FAILED OUR CHILDREN. But we won't fail again. I won't fail you again. Or any of the children of the Justice Society. That is is my oath.

Appearing in "Princes of Darkness, Part 5: The Last Light"Edit

Synopsis for "Princes of Darkness, Part 5: The Last Light"Edit

Racing around the world, Air Wave and Flash are defeating Kobra cells in Calcutta and Paris. Air Wave cannot understand what would drive people to follow a madman... but Flash, drawing on his years of experience, cites that people have willingly followed villains like Vandal Savage, Per Degaton, Stalker, Kulak and Johnny Sorrow, whether from anger at the world, fear, or apathy.

In New York, Alex has gained controlled of Eclipso using a set of mystic tattoos acquired on Diablo Island. He uses his new powers to free the Eclipso zombies and move the Moon out of its permanent eclipse. The day is saved and the heroes are excited, but Alex seems to have done this with the wrong intentions, muttering, "You belong to me now, demon."

In Los Angeles, Obsidian reacts to the sunlight, by explaining what drove him to villainy - his father, Sentinel, one of the most powerful heroes on the planet, was not there for him during his childhood, during which he was abused by his foster father. The heroes try to talk him down, but Obsidian blasts Stargirl, leading Hawkman to take the offensive. Stargirl recovers, surprised that Billy just turned into the World's Mightiest Mortal. Hawkman can't take Obsidian alone, though...

In New York, Flash arrives, to find the day has been saved. Suddenly, the Sand monster arrrives, and a facsimile of Doctor Fate's tower rises out of the street under Mordru's control.

In Los Angeles, Obsidian has grown to massive size, but the heroes have a plan - disrupt his powers using Captain Marvel's lightning. He loses control of the Shadowforms, but he survives. Jade shares her powers with her crippled father, asking him to "...save Todd this time."

In Doctor Mid-Nite's office, Jakeem Thunder wakes up, having been given an artificial voicebox to compensate for the fact that Mordru cut his vocal cords. They hand him his pen and he summons the Thunderbolt.

On Gemworld, Power Girl, Hawkgirl and Dove have found the vault that Mordru trapped Arion's soul in so he could possess his body. It is guarded by a local lowlife named Child and his quartz golem, Flaw. However, the heroes make quick work of them and rip the vault open. Arion appears, telling them that he plans to pass over into the afterlife. However, in doing so, Mordru will be weakened, and then the heroes can strike. Power Girl wants to talk to him, since she beives he is her grandfather, but he tells her he is not, saying "I promised your mother I would protect you," and promising she will soon know the truth before he teleports the three heroes back to Earth.

In Los Ageles, Obsidian is growing in power, and easily defeats Sentinel and Jade.

In New York, Mordru, armed with the powers of Doctor Fate, Arion and Sentinel, easily defeats the JSA. The Freedom Fighters try to stop him, but are swiftly defeated. At this point Arion strikes, but even this is not enough to depower the villain and he knocks the heroes aside. This leaves one hero standing - Jakeem Thunder, now proofed against Mordru's powers, orders Johnny Thunderbolt to "hit him until I say the magic words". Thunderbolt gleefully complies as the heroes recover, then Jakeem Thunder gets Johnny to trap him in his magic pen. This causes the stolen powers of Sentinel, manifesting as a burning green heart - a "Starheart". Flash take the burning heart and runs across America as Obsidian steals the last of Sentinels strength. At the last moment, Flash arrives, throwing the Starheart to Sentinel, where it morphs into a ring. Once again, Sentinel is the Green Lantern, back at the peak of his powers. He swiftly overpowers Obsidian. Sand and the Freedom Fighters revert to their original forms.

However, the threat is not over - the after-effects of moving the Moon are playing havoc with the world's tectonics. Sand jumps into action, diving into the planet's asthenosphere and absorbing the trauma, though this friends beluieve him killed as a result.

All the heroes arrive in New York. They need to find a way to deal with Mordru, who propmtly escapes from the Thunderbolt Pen. He claims that it is his destiny to wipe the world clean and start again. However, Hector Hall takes control of the Helm of Fate and the Amulet of Anubis, declaring, "Your fate is in my hands."

Retrieved from "https://heykidscomics.fandom.com/wiki/JSA_Vol_1_50?oldid=1521490"
Community content is available under CC-BY-SA unless otherwise noted.