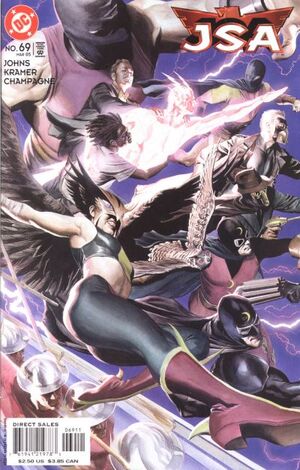 You aren't real, Courtney. You're just a dream.

The same year, in Pittsburgh, Mister Terrific (Michael Holt) boards a train in an attempt to visit his predecessor, but gets put in the colored only car.

In Calvin City, Atom-Smasher follows his godfather, who has started doing some work for the local crime family.

Stargirl tells Ted Knight he has to become Starman (Ted Knight) again to stop a great evil that is coming. Hospital workers come in and Stargirl tries to fight them off but gets sedated. Ted decides she is a figment of his imagination.

In New York, Sandman (Wesley Dodds) becomes Sandman and travels to his hideout to apologize to Sandy.

Back at the hospital, Stargirl has been put into a straightjacket and padded room.

Retrieved from "https://heykidscomics.fandom.com/wiki/JSA_Vol_1_69?oldid=1437813"
Community content is available under CC-BY-SA unless otherwise noted.