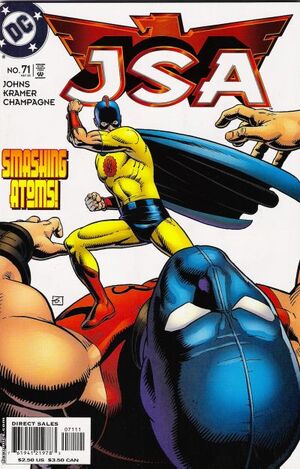 Justice? You don't know the meaning of the word.

Back in 1951, Atom-Smasher and Atom (Al Pratt) work together to stop their betrayal of the Justice Society of America, after they stop fighting. Mister Terrific (Michael Holt) takes on the Ku Klux Klan, quickly dispatches them, and runs into Mister Terrific (Terry Sloane). Michael tells Terry that he is needed to help stop Per Degaton, and urges him to put back on the costume. Michael then sees that Terry is holding his niece, Veronica. In Washington, D.C., Hourman (Rex Tyler) faces Per Degaton and his men, the Red Morgue. Per Degaton continues to send the Red Morgue back in time to kill people, this time it is Rex's old friend Jason Huntington, and then threatens to kill Wendi Harris. Hourman (Rick Tyler) comes to the rescue. Meanwhile, Stargirl and Starman (Ted Knight) fly around Opal City and talk about saving the future, while Sand and Sandman (Wesley Dodds) do the same. Jakeem Thunder and Johnny Thunder bond after their recent brawl, and head to the JSA Brownstone to find the entire JSA there! They then try to form a plan for dealing with Per Degaton when the Hourmans show up, kicking down the door, and announce that Per Degaton is going to assassinate the President of the United States, Harry S. Truman!

Retrieved from "https://heykidscomics.fandom.com/wiki/JSA_Vol_1_71?oldid=1437815"
Community content is available under CC-BY-SA unless otherwise noted.