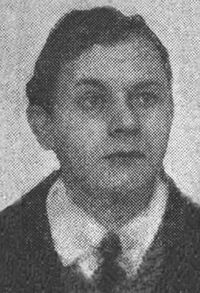 He was the brother of writer Otto Binder.

John "Jack" Binder (August 11, 1902 – March 1986)[1] was a Golden Age comics creator and art packager. A fine artist by education, Binder had a prolific comics career that lasted primarily from 1937 to 1953, through his most concentrated work was through 1946. He was the creator of the original comic book Daredevil, for Lev Gleason Publications. One of Binder's younger brothers was comic book writer Otto Binder.

Born in Austria-Hungary, Binder emigrated to America in 1910, where he settled with his parents and five siblings in Chicago.[2]

During the 1930s, Jack Binder wrote and drew the comic Zarnak by Max Plaisted, a Jack Binder pseudonym, which appeared in Thrilling Wonder Stories magazine.[3]

Moving to New York City, Binder worked for three years for the Harry "A" Chesler studio, one of the early comic-book "packagers" that supplied complete comics on demand for publishers entering the new medium. Binder left the Chesler studio in 1940 as the firm's art director.

In the early 1940s Binder drew for Fawcett Comics, Lev Gleason Publications, and Timely Comics; during this period he created the Golden Age character Daredevil (not to be confused with the Marvel character of the same name) for an eight-page backup feature in Lev Gleason Publications' Silver Streak #6 (Sept. 1940), and along with Stan Lee, co-created the Destroyer in Timely's Mystic Comics #6 (Oct. 1941).

Six months after the debut of Thrilling Wonder Stories, its June 1937 issue contained a picture feature by Jack Binder entitled If---!.[5] Binder's earlier training as a fine artist[6] helped him create detailed renderings of space ships, lost cities, future cities, landscapes, indigenous peoples, and even ancient Atlantins. If---!'s pen and ink drawings are hand-lettered and rendered in black and white.

If---!'s one-to-two page studies presented readers with possible outcomes to early twentieth century scientific quandaries in an age when anything and everything seemed possible. Directed at science fiction enthusiasts and the scientifically-minded, readers ventured visually into the unknown to ponder scientific possibilities in architectural and schematic detail. Major catastrophes never result in the complete destruction of the human race; humans simply immigrate to new planets, create a work around solution, find a scientific way out, or just start civilization over again.

By 1942 Binder had formed his own studio, with over fifty artists, in a Fifth Avenue Manhattan loft.[12] Later, Binder moved his studio to Englewood, New Jersey, to the upstairs loft of a barn, where it produced material for publishers like Fawcett, Nedor Comics, and Lev Gleason Publications. Features the studio worked on included the Fighting Yank, Mister Scarlet and Pinky, Bulletman, Ibis the Invincible, Captain Battle, the Black Owl, and the adapted pulp magazine features Doc Savage and The Shadow. In addition to running the studio, Binder drew layouts for Fawcett Comics stories which other artists finished for him.

After closing his studio in 1946, Binder continued to work casually in the industry until he fully retired in 1953 and returned to fine and commercial art. He made his home in Chestertown, New York, at the time of his death,

Gil Kane: "Binder had a loft on Fifth Avenue and it just looked like an internment camp. There must have been 50 or 60 guys up there, all at drawing tables. You had to account for the paper that you took."[12]