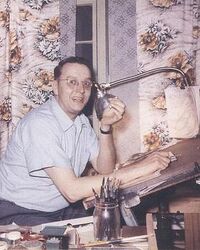 Born in New Castle, Pennsylvania, Cole—the third of six children of a dry goods-store owner and amateur-entertainer father and a former Elementary school-teacher mother—was untrained in art except for the Landon School of Illustration and Cartooning correspondence course. At age 17, he bicycled solo cross-country to Los Angeles, California and back. Cole recounted this adventure in an early self-illustrated professional sale "A Boy and His Bike" (which has often been cited as appearing in Boy's Life magazine, but in fact the source of this article is unknown, but speculated to have likely appeared in Cole's hometown newspaper). Back home, Cole took a job at American Can and continuued to draw at night.

In 1936, having married childhood sweetheart Dorothy Mahoney soon after graduating High school, Cole moved with his wife to New York City's Greenwich Village. After spending a year attempting to break in as a magazine/Newspaper illustrator, Cole began drawing for the studio of the Harry "A" Chesler, one of the first comic-book "packagers" who supplied outsourced stories to publishers entering the new medium. There, Cole drew such features as "TNT Todd of the FBI" and "Little Dynamite" for Centaur Publications comics such as Funny Pages and Keen Detective Funnies. He produced such additional features as "King Kole's Kourt" (under the pseudonym Geo. Nagle), "Officer Clancy", and "Peewee Throttle" (under the pseudonym Ralph Johns), and "Ima Slooth."

Lev Gleason Publications hired Cole in 1939 to edit Silver Streak Comics, where one of his first tasks was to revamp the newly-created superhero Daredevil. Other characters created or worked on by the prolific tyro include MLJ's The Comet in Pep Comics—who in short order became the first superhero to be killed—and his replacement, the Hangman.

After becoming an editor at Lev Gleason and revamping Jack Binder's original Golden Age Daredevil in 1940, Cole hired on at Quality Comics. He worked with Will Eisner, assisting on the writer-artist's signature hero The Spirit—a masked crime-fighter created for a weekly syndicated, newspaper Sunday-supplement, with his adventures reprinted in Quality comics. At the behest of Quality publisher Everett "Busy" Arnold, Cole later created his own satiric, Spirit-style hero, Midnight, for Smash Comics No. 18 (Jan. 1941). Midnight, the alter ego of radio announcer Dave Clark, wore a similar fedora hat and domino mask, and partnered with a talking monkey—questionably in place of the Spirit's young African-American sidekick, Ebony White.[4] During Eisner's World War II military service, Cole and Lou Fine were the primary Spirit ghost artists; their stories were reprinted in DC Comics' hardcover collections The Spirit Archives Vols. 5 to 9 (2001–2003), spanning July 1942 – Dec. 1944. In addition, Cole continued to draw one and two-page filler pieces, sometimes under the pseudonym Ralph Johns, and a memorable autobiographical appearance in "Inki," which appeared in Crack Comics #34.[5]

Cole created Plastic Man for a backup feature in Quality's Police Comics No. 1 (Aug. 1941). While Timely Comics' quickly forgotten Flexo the Rubber Man had preceded "Plas" as comics' first stretching hero, Cole's character became an immediate hit, and Police Comics' lead feature with issue #5. As well, Cole's offbeat humor, combined with Plastic Man's ability to take any shape, gave the cartoonist opportunities to experiment with text and graphics in groundbreaking manner—helping to define the medium's visual vocabulary, and making the idiosyncratic character one of the few enduring classics from the Golden Age to modern times. Plastic Man gained his own title in 1943.

By the decade's end, however, Cole's feature was being created entirely by anonymous ghost writers and artists—including Alex Kotzky and John Spranger—despite Cole's name being bannered. One last stint by Cole himself in 1949–1950 could not save the title. Progressively floundering, the comic Plastic Man was cancelled in 1956 after several years of reprinting the Cole material, and new stories by lesser talents.

Cole's career by that time had taken on another dimension. In 1954, after having drawn slightly risqué, single-panel "good girl art" cartoons for magazines, using the pen name "Jake", Cole became the premier cartoon illustrator for Playboy. Under his own name, he produced full-page, watercolored gag cartoons of beautiful but dim girls and rich but equally dim old men. Elaborately finished, they provided the template for similar cartoons in the magazine. Cole's art first appeared in the fifth issue; he would have at least one piece published in Playboy each month for the rest of his life. So popular was his work that the second item of merchandise ever licensed by Playboy (after cufflinks with the famous rabbit-head logo) was a cocktail-napkin set, "Females by Cole", featuring his cartoons. Cole biographer Art Spiegelman said, "Cole's goddesses were estrogen soufflés who mesmerized the ineffectual saps who lusted after them."[6][7]

In 1958, Cole created his own daily newspaper comic strip, Betsy and Me, and successfully sold it to the Chicago Sun-Times syndicate. The strip began on May 26 and chronicled the domestic adventures of nebbishy Chester Tibbet as narrator, his wife Betsy, and their 5-year-old genius son, Farley. The strip was drawn in the "ultra-modern abstract style" popularized by UPA animations such as Mr. Magoo and the comedy arose from the contradiction between the drawings and their captions. Betsy and Me ran for two and half months. On August 13, 1958, Cole killed himself. His last daily was published on September 6 and his last Sunday on September 14. In the final Cole daily, Betsy and Chester are seen signing up for a brand-new tract house in Sunken Hills.[8] A number of cartoonists tried to continue the strip but it was eventually discontinued in December.[9]

Cole killed himself on August 13, 1958. R. C. Harvey described it as "one of the most baffling events in the history of cartooning".[10] Cole was living at 703 Silver Lake Road in Cary, Illinois, about 40 miles northwest of Chicago, and told his wife at about two in the afternoon that he was picking up the mail and the newspapers. Driving his Chevrolet station wagon to Dave Donner's Sport Shop in nearby Crystal Lake, he purchased a .22 caliber, single-shot Marlin rifle. He phoned a neighbor between 5:15 and 5:30 pm to say what he was doing, and for the neighbor to tell Dorothy. Parked on a gravel road west of the intersection of Illinois Routes 176 and 14, Cole was found by three boys at approximately 6 pm, shot in the head but still alive. A McHenry County Sheriff's deputy arrived and called for an ambulance ten minutes later. Cole died at nearby Woodstock Hospital at 6:45 pm

That morning, he had mailed two suicide notes, one to Dorothy (who at a coroner's inquest testified that he had given his reasons) and one to his friend and boss, Playboy editor-publisher Hugh Hefner. The letter to his wife was never made public and the reasons for Cole's suicide have remained unknown. Dorothy never again spoke with her late husband's family nor with Hefner, and remarried approximately a year later.

Cole's story "Murder, Morphine and Me", which he illustrated and possibly wrote[11] for publisher Magazine Village's True Crime Comics No. 2 (May 1947), became a centerpiece of psychiatrist Dr. Fredric Wertham's crusade against violent comic books. Wertham, author of the influential study Seduction of the Innocent, cited a particular panel of the story's dope-dealing narrator about to be stabbed in the eye with a hypodermic needle as an example of the "injury-to-the-eye" motif.[12]

In 2003, writer-artist Art Spiegelman and artist Chip Kidd collaborated on a Cole biography,[13] a portion of which had been published in The New Yorker magazine in 1999.

Retrieved from "https://heykidscomics.fandom.com/wiki/Jack_Cole?oldid=1624243"
Community content is available under CC-BY-SA unless otherwise noted.