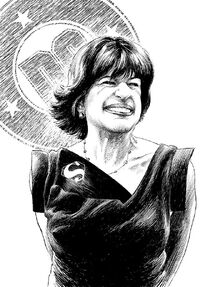 Jenette Kahn grew up in Pennsylvania with her parents and brother. She was an avid comics fan, a practice supported by her parents, with particular favorites being Batman, Superman, Little Lulu, Uncle Scrooge, and Archie. After graduating from Harvard with honors in art history, she went on to found three groundbreaking magazines for young people. The original publication, Kids, was entirely written by children for one another. Although published in the early 1970s, Kids tackled subjects that are relevant today: drug abuse, diversity, and animal protection.

Kahn was 28 when she became publisher of DC Comics home to over five thousand characters, including Superman, Batman and Wonder Woman. Five years later, she became President and Editor-in-Chief. She is one of the most talented and respected women in the entertainment industry, Kahn is renowned for transforming comics from a children's medium to a visually stylish and sophisticated art form for adults. Under Kahn’s order, DC broke new ground with comic books and graphic novels, including Ronin, The Dark Knight Returns, Hellblazer, Watchmen, Road to Perdition, A History of Violence, Books of Magic, V for Vendetta, Sandman.

Retrieved from "https://heykidscomics.fandom.com/wiki/Jenette_Kahn?oldid=150062"
Community content is available under CC-BY-SA unless otherwise noted.