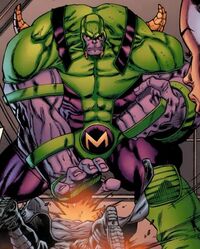 Jeremy Stone spent the early years of his life unaware that he was not entirely human. However, when Jeremy discovered his heritage and his ability to transform into a giant being of superhuman strength, he joined the intergalactic war between the Kherubim and Daemonites, becoming a member of the WildC.A.T.s. and using the codename Maul.

When the WildC.A.T.s traveled to Khera, the Kherubim native homeworld, he discovered his ancestors made up part of a caste of artesans who were the original Kheran natives (now called Titanthropes), but were dislocated to the subterraneans by another alien race. There, he fell in love with another Titanthrope, a woman named Glingo. She gave her life to prevent an attack using bombs planned by the Coda. They intended to frame the Titanthropes, but the plan was exposed and the bomb killed her. This was a serious emotional blow to Maul. Later, when the team returned to Earth, he quit the WildC.A.T.s to become a professor. At the end of the first series he came back, but soon left when Zealot was apparently killed.

In the second series, it was revealed he could increase his intelligence by decreasing his body mass, but this proved to be physically depleting. Jeremy has devoted himself to science and has shown some reluctance to use his superhuman powers these days. He also started a relationship with Voodoo. He was nearly blind after Samuel Smith's attack, but eventually recovered.

Jeremy found himself yet again working alongside his Wildcats teammates, taking on the possibly cataclysmic threat of Captain Atom that led to Worldstorm.[1]

His relationship with Voodoo has ended recently; an aspect of her telepathic powers is that they increase with physical intimacy, and Voodoo's willingness to be intimate with other men to use them was, despite his protests, not something Jeremy could cope with. The break-up fight ended when Pricilla intentionally angered him to the point that he grew in size. With the resulting loss of intellect that comes with his size growth, he forgot they were fighting, and she took the opportunity to leave.[2]

Following Armageddon, Jeremy spent great amounts of time in his decreased mass form, trying to develop a way to recreate the Halo batteries that the team no longer had access to in light of Spartan losing his void powers. He was increasingly jealous of the seemingly close relationship that Voodoo had with Spartan. This became true when Jeremy privately and dejectedly saw them embracing each other.[3] After battling Lord Defile, Jeremy ended his jealously as he saw that being coupled with Voodoo wouldn't work out in the end. Instead, he amended his relationship with her as friends.[4]

Jeremy ventured with the Wildcats in stopping former Wildcats member, Tao, and was gifted a new and improved costume based on his original attire by Max Faraday.[5] When the Authority summoned many of Earth's heroes to UnLondon and were notified of being able to leave Earth on the Carrier, Maul chose to stay on Earth. He soon then joined in Earth's war against the militant Knights of Khera and fought his Titanthrope counterparts, Phobos and Deimos. Despite the Titanthropes' experience and reputation as notorious warriors, Maul was able to kill them by bashing their skulls against each other from learning to "fight dirty" from Grifter.[6] Jeremy later left the Wildcats with Zealot as he agreed with her disagreement over Spartan's plan in uniting humanity rather than helping to build a planetary army for humanity to defend itself. Also it was the deaths of the Titanthropes which stymied him to take no pleasure of and for his leaving.[7]

Following the three month period of Earth's reconstruction, Jeremy had gone along with Zealot's plan in creating a new Coda by having female volunteers to be artificially impregnated to create more female warriors through Kheran technology. However, this experimentation process endangered the lives of some of the volunteers given that it was only suited to Kherubims.[7][8] Jeremy shared his concerns on this to Zealot, which she steadfastly accepted this, much to his shock. At this point, Midnighter infiltrated the Coda's ward and was then confronted by Jeremy as Maul. Midnighter easily subdued him before telling him of Zealot's intentions, whom the former was appalled and disgusted to find Jeremy to even go along with this plan. Subsequently, Zealot and Midnighter battled each other.[9] When their fight almost had them ending both of their lives, Maul, mixed with guilt and tired of the senseless violence, intervened. At that moment, Zealot was about to slice him out of reflex, and without anytime to dodge, Maul shrunk himself down as small as he could to avoid her blade and wound up at the subatomic scale.[10] After this, everyone that had seen this thought he apparently disintegrated.