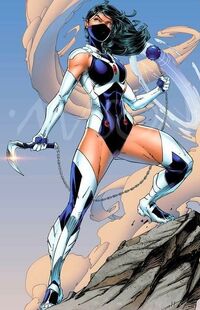 Jodi Morinaka Slayton was the daughter of Lynn Morinaka, a Japanese woman. Shortly after giving childbirth, Lynn Morinaka had to flee from the hospital, because International Operations was interested in her children, thinking they had inherited their father's superpowers. Lynn managed to take Jodi with her, but she was forced to leave Jodi's twin brother behind. Her son was taken and raised by Kaizen Gamorra.

Jodi was raised by her mother without meeting her father, who in turn was never informed of his daughter's existence. When she was five years old, her mother started to teach her martial arts. After her mother died, Jodi, now sixteen years old, set out to find her long-lost father. Using the information her mother had given her, she went to America to meet up with her father, Marc Slayton a.k.a. Backlash. He in turn discovered that his daughter had inherited his superhuman agility and an innate combat skill from him, but she also displayed superhuman speed which he never had. Inspired, Jodi created her own costumed persona, Crimson, and began adventuring alongside her father and his lover, Taboo. Jodi found her new life exciting, despite her father's protests. On Gamorra island, during Fire from Heaven, Jodi met Aries and felt a strange connection to him. Aries turned out to be Jodi's twin brother, though he was artificially aged and already an adult. He escaped before he learned of his relationship to Jodi though.

When Backlash joined Department PSI, Jodi was sent to boarding school to keep her safe. Nevertheless, she moved back to Department PSI when even boarding school didn't turn out to be safe. When Backlash became co-leader of Wildcore, Crimson went with them on several missions, though she officially wasn't a member. Losing her lover, Styrian, Jodi became disenchanted with the life of a superhero and decided to retire. She renewed her studies, choosing to go to Bay Area University in San Francisco.

Her retirement didn't last long though, as she soon got caught up in a series of adventures in a new identity, Jet, and became romantically involved with Special Crime Forces Officer Robert Stubbs, battling enemies such as Rhyme and Reason, Timewaster and Mr. Meaner. She also captured many criminals who had escaped from the maximum security facility, Purgatory Max and were responsible for the deaths of many Wildcore members.

Jodi later took up her father's code-name while working with Savant from Savant Garde and WildC.A.T.s.[1]

After raiding Stormwatch Plaza and erasing the organization's databases, Jodi and Savant were approached by Nemesis into helping her to prevent the apocalypse that she had experienced in the future. Though initially the two were highly skeptical of Nemesis, Jodi was later strongly convinced as her future-self told Nemesis to tell her past-self a name that she and only herself cherished the most: Kameko, a pet turtle that she had loved when she was a little girl. Jodi, Savant and Nemesis found their leads in preventing the world's cataclysm to a hidden silo in Utah containing clones of the High. Despite destroying the silo bunker, Jodi and her friends' efforts failed in preventing the apocalypse.

After the clones of the High detonated and devastated the Earth, Jodi and Nemesis joined the Wildcats in the ruins of Los Angeles. They stayed with the Wildcats for a while, even battling Majestic who had started a new Kheran empire on the islands of Hawaii. Jodi and Nemesis refused Majestic's offer for them to join him. But after a battle against Lord Defile and his Daemonites, Nemesis and Jodi quit the Wildcats and decided to accept Majestic's offer after all.[2]

However it was then revealed that Jodi and Nemesis came to "New Khera" because they were blackmailed by Majestic, who had imprisoned Savant as the means of breeding via test tubes. Furthermore, Savant was also imprisoned for learning that there was something other than Armageddon that had driven Majestic mad. Later, Jodi urgently contacted the Wildcats for help.[3]

The Wildcats, under the pretense of simply visiting the island, had Spartan distract Majestic and rescued Savant, Jodi, and Nemesis. Unfortunately, Majestic attempted to stop them. This forced Nemesis to fight her lover, while giving Jodi and the Wildcats the chance to race back to Los Angeles where Ladytron was solely defending the Halo Building and human refugees against Lord Defile and his Daemonites. After the Halo Building was subsequently destroyed, Jodi and the Wildcats reunited with Team-7, where she was overjoyed to be together with her father.[4]