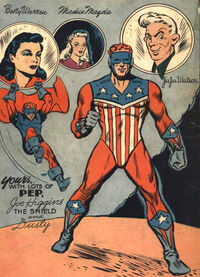 Tom Higgins was a scientist working on a means of boosting human performance during WWII. Although he was murdered by foreign agents before he was able to mass produce the formula, his son Joe used the formula on himself. Creating a patriotic themed costume, he avenged his father's death and became an agent for the FBI.

For a time, only the "chief" of the F.B.I. knew of Joe's dual identity. Joe was assigned to work with fellow agent Ju Ju Watson, who became a very good friend of his, but didn't know he was also the Shield.

One day while Joe was visiting an airfield, a plane on the ground exploded, killing everybody on board, including the father of a little boy named Dusty Simmons. Suspecting foul play, Joe and his girlfriend, Betty Warren, snooped around. Betty noticed some thugs tampering around in a hangar. They quickly grabbed her, but Dusty saw the confrontation and came to her rescue. Later, the Shield believed the kid showed "plenty of spunk" in saving Betty, and not only asked him if he wanted to be a detective with him, but also shared his true identity. The newly orphaned boy agreed to be his sidekick, better known as — Dusty the Boy Detective.

At one time, the Shield was frozen in suspended animation due to the Eraser's "Ion Weapon," his son, Bill Higgins, found a spare uniform and continued his father's legacy. He fought alongside the Mighty Crusaders as a hero, but his civilian life was difficult, as he would often shuffle from job to job, and never felt worthy of following in his father's footsteps.

When Bill finally asked for help to "cure" his father's condition, the Comet used his "Altroxian Science" to reverse the Ion Weapon's effects, and the original Shield came back to life. With his father in action again, Bill retired his Shield identity and joined the Armed Forces.

Joe agreed to join the Mighty Crusaders, replacing his son, and fought alongside his teammates until they disbanded.

Retrieved from "https://heykidscomics.fandom.com/wiki/Joe_Higgins?oldid=552011"
Community content is available under CC-BY-SA unless otherwise noted.