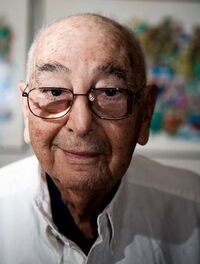 He was born Hymie Simon.

Joseph H. Simon (born October 10, 1913) is a comic book writer, artist and editor who created or co-created many important characters in the 1930s-1940s Golden Age of Comic Books, and who served as the first editor of Timely Comics, the company that would evolve into Marvel Comics. His infrequently used pen names were Gregory Sykes and Jon Henery.

With his partner, artist Jack Kirby, he co-created Captain America, one of comics' most enduring superheroes, and the team worked extensively on such features at DC Comics as the 1940s Sandman and Sandy the Golden Boy, and co-created the Newsboy Legion, the Boy Commandos, and Manhunter. Simon & Kirby creations for other houses include Fighting American and The Fly. In the late 1940s, he and Kirby created the field of romance comics, and were among the earliest pioneers of horror comics.

Raised in Rochester, New York, the son of a tailor, Simon attended Benjamin Franklin High School, where he was art director for the school newspaper and the yearbook — earning his first professional fee as an artist when two universities each paid $10 publication rights for his art deco, tempera splash pages for the yearbook sections. Upon graduation in 1932, Simon was hired by Rochester Journal American art director Adolph Edler as an assistant, replacing Simon's future comics colleague Al Liederman, who had quit. Two years later, Simon took an art job at the Syracuse Herald in Syracuse, New York, and shortly thereafter succeeded Liederman as art director of the Syracuse Journal American. This short-lived job ended when the Newhouse chain bought and consolidated the three local newspapers.

By 1940, Simon became editor of Victor A. Fox's Fox Publications, where future collaborator Kirby was on staff. According to Simon at the 1998 San Diego ComicCon, this is where the two met:

"I had a suit and Jack thought that was really nice. He'd never seen a comic-book artist with a suit before. The reason I had a suit was that my father was a tailor. Jack's father was a tailor too, but he made pants! Anyway, I was doing freelance work and I had a little office in New York about ten blocks from DC's and Fox's offices, and I was working on Blue Bolt for Funnies, Inc. So, of course, I loved Jack's work and the first time I saw it I couldn't believe what I was seeing. He asked if we could do some freelance work together. I was delighted and I took him over to my little office. We worked from the second issue of Blue Bolt..." [1]

...and remained a team across the next two decades. Collectors have shown what is purported to be original art for an unpublished, five-page Simon & Kirby collaboration titled "Daring Disc", which may predate the duo's Blue Bolt After leaving Fox and landing at pulp magazine publisher Martin Goodman's Timely Comics, the new Simon & Kirby team created the seminal patriotic hero Captain America in 1940. Kirby's dynamic perspectives, groundbreaking use of center-spreads, cinematic techniques and exaggerated sense of action made the title an immediate hit and rewrote the rules for comic-book art. Captain America Comics is credited with comics' first full-page panel.

Captain America became the first and largest of many hit characters the duo would produce. The Simon & Kirby name soon became synonymous with exciting superhero comics, and the two became industry stars whose readers followed them from title to title.

A financial dispute with Goodman led to their decamping to National Publications, the primary precursor of DC Comics, after ten issues of Captain America. Given a lucrative contract at their new home, Simon & Kirby revamped the Sandman in Adventure Comics, and created the "kid gang" teams the Boy Commandos and the Newsboy Legion, and the superhero Manhunter.

As superhero comics waned in popularity after the end of World War II, Simon & Kirby producing a variety of other genre stories. In partnership with Crestwood Publications a.k.a. Prize Comics, they launched an early horror, the atmospheric and non-gory Black Magic, and created the masked Western hero Bullseye. Simon & Kirby are credited as well with publishing the first romance title, Young Romance Comics. In addition, Kirby and Simon produced crime, and humor comics. Later, in 1953, they would form their own short-lived comics company, Mainline Publications.

The partnership ended in 1954 with the comic book industry beset by self-imposed censorship. negative publicity, and a slump in sales. Simon turned primarily to advertising and commercial art, while dipping back into comics on occasion. He and Kirby teamed one last time in the 1970s, on a new incarnation of the Sandman.

On December 14, 2011, Joe Simon died after suffering briefly from an illness. He was 98 years old.

Retrieved from "https://heykidscomics.fandom.com/wiki/Joe_Simon?oldid=1395348"
Community content is available under CC-BY-SA unless otherwise noted.