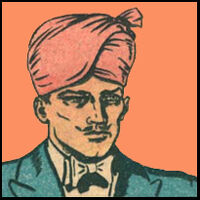 Friends: Lorna Dorne, who's engaged to him, and Balthar, a giant boy with a magical turban who befriended him.

Retrieved from "https://heykidscomics.fandom.com/wiki/John_Cardy_(Earth-MLJ)?oldid=1559676"
Community content is available under CC-BY-SA unless otherwise noted.