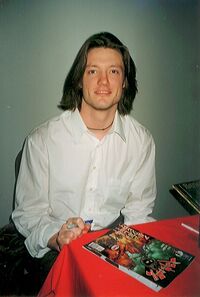 He is best known for his work on Planetary with Warren Ellis, Astonishing X-Men Vol 3 with Joss Whedon, and Captain America Vol 4 .

He lives in New York City.

In July 2006, Cassaday was announced as the director of I Am Legion, a film adaptation of the graphic novel he created with writer Fabien Nury. The film will be produced by Pierre Spengler. [1]

In 2009, Cassaday directed and episode of the Joss Whedon series Dollhouse. He also was a Concept Artist on the DC film The Watchmen

In 2012, Cassiday returned to Marvel as the artist for the flagship series of the Marvel Now (event) relaunch, Uncanny Avengers, alongside writer Rick Remender.

Retrieved from "https://heykidscomics.fandom.com/wiki/John_Cassaday?oldid=149133"
Community content is available under CC-BY-SA unless otherwise noted.