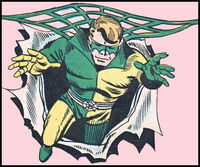 John Raymond grew up a with a "rough necked" brother who was always in trouble with the neighborhood police. When his brother, Tom, was sent to reform school, John took up studying Criminology.

Years later, Tom broke out of jail and went to see his brother. He threaten him with a gun and demanded money. John pleaded for his brother to return to prison and serve the rest of his term.

Meanwhile, the local police tried to call John to warn him of his brother's escape. Because Tom cut the phone wires, the police couldn't make it through, and realized that John must be in trouble.

Squad cars pulled up to apartment complex and the police took the armed gangster back to prison.

It was after this incident that John understood his mission — to show criminals they can't escape their own Web.

While he was a Professor of Criminology, he met Rose Wayne, or "Rosie," who was a student of his. After she and John were assaulted by some Japanese spies, Rose noticed a spider clasp that was dropped by the professor and concluded he must be the Web.

Being that she was studying Criminology, she began to follow John, and became enamored with him because he was the Web. John confessed about his dual identity and they finally married. At first she enjoyed the glamorous life of being "Mrs. Web," and even helped him during his earlier exploits. However, over time she became a fussy and emotionally manipulative wife. She often would threaten John with divorce and even infidelity. She would always go running to mother, but never divorced John. She continued her hen-pecking and poor John carried on being her spineless spouse while sneaking out to be the heroic Web.

Retrieved from "https://heykidscomics.fandom.com/wiki/John_Raymond_(Earth-MLJ)?oldid=1578694"
Community content is available under CC-BY-SA unless otherwise noted.