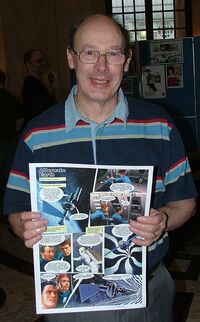 John Ridgway (born May 4, 1940[1]) is a British comic artist who began working in comics in 1973, drawing for DC Thomson's Commando title, and became a full-time professional comics artist in 1984. He has worked for numerous publishers including DC and 2000AD, with the majority of his work for Marvel being on Marvel UK's Doctor Who Magazine.

Ridgway began his career initially as a hobby, drawing D.C.Thompson's Commando War Stories alongside professional work as a design engineer. In 1984 Ridgway became a full-time professional, broadening his employment to include 2000 AD, Guttenberghus, Marvel Comics and DC Comics.

Ridgway's full-colour work is immediately distinctive for its unusual realism coupled with a delicate, sketchy pencil line, the two combining to give a slightly old-fashioned look influenced strongly by classic British artist Frank Hampson. This has made him ideal for illustrating strips such as the 1960s set Summer Magic and Enid Blyton's The Famous Five, but it is also a look that lends itself well to large-scale science fiction such as Babylon 5. His portfolio is unusually wide, incorporating Doctor Who, Zoids, the Incredible Hulk and My Name is Chaos.

Ridgway has been responsible for creating the look for a number of series, including Hellblazer,[2] Luke Kirby and Junker, a sign of the high regard in which he is held by many editors. He was also the artist chosen to depict Judge Dredd without his helmet for the first and only time in the character's 28-year history, in the saga The Dead Man.

He has recently begun experimenting with incorporating computer graphics into his work.

Retrieved from "https://heykidscomics.fandom.com/wiki/John_Ridgway?oldid=1540739"
Community content is available under CC-BY-SA unless otherwise noted.