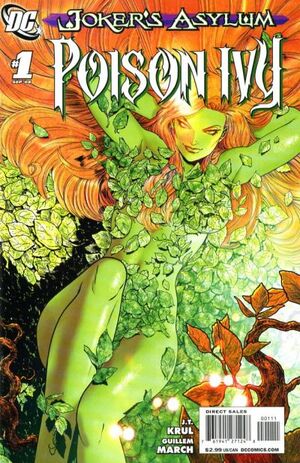 A plant is delivered to Joe Cabaret at Infinite Conceptions. There is a card with an ominous message but it is unsigned. The plant begins growing rapidly and entangles Joe with its thorny vines. Later Batman, Commissioner Gordon and several police officers investigate the scene. Batman points out that poison wasn't used; the plant stabbed him to death with its thorns. It seems Poison Ivy has a personal gripe.

Poison Ivy reflects on her origins and how her transformation into Poison Ivy wasn't instantaneous and was something she had to grow into. At first, Poison Ivy wanted nothing to do with humans any longer and isolated herself in a forest. She could hear the plants talking to her but also heard their screams as they were destroyed...which she learned during logging activities. She tried to plead with the drivers but they ignored her. At the time she didn't know that she had the power to stop them but knew that one day she would. The logging was being done for Windrich Estates.

Roger Hayes is playing golf when he slices into a thick grove of trees. He enters the grove and is immediately attacked and strangled by vines. It takes three hours for the groundskeeper to find him. Later Gordon and Batman inspect the scene and Batman is hopeful that the two deaths will form a pattern he can track. Back at the Batcave, Batman discovers that the two murdered men were part of Windrich Estates along with a third partner...David Bennet. He tracks Bennet for six consecutive nights. On night six Bennet pulls up to some prostitutes. Batman spots Poison Ivy in the alley and takes off after her only to find it was a decoy. The blonde hooker Bennet left with turns out to be Poison Ivy in a wig and flesh-colored make-up. She paralyzes Bennet with her toxin-filled kiss and hacks him to pieces with a hand-axe before Batman arrives.

Retrieved from "https://heykidscomics.fandom.com/wiki/Joker%27s_Asylum:_Poison_Ivy_Vol_1_1?oldid=1437229"
Community content is available under CC-BY-SA unless otherwise noted.