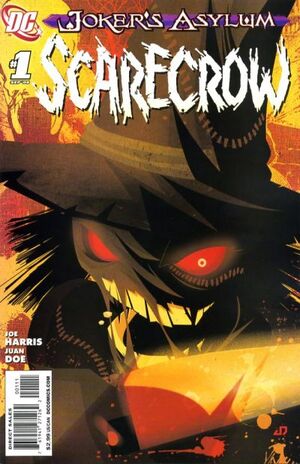 But what frightens you, I wonder? What makes you, gentle reader, soak your pants and run screaming for your momma when the lights go out? I have some thoughts on the subject, to be sure... but why not consult an expert on such things? Why, I just have the man in mind. But be careful... this doctor of psychiatry isn't just a perennial favorite among the inmates at dear old Arkham Asylum... He's also a client!

Appearing in "Dark Knight of the Scarecrow"Edit

Synopsis for "Dark Knight of the Scarecrow"Edit

The story begins with the Joker giving a prologue about fear and the antagonist of the story: Doctor Jonathan Crane, a.k.a. Scarecrow and starts narrating it. A group of girls are in a slumber party, which is actually a planned prank organized by a popular girl named Heather against an unpopular girl named Lindsay. Heather and her friends are talking and preparing everything for their victim, Lindsay, who came shortly after they finished preparing a hidden camera for the prank. Heather and the other gave Lindsay a warm welcome and when they were entering the house they see a scarecrow outside the house which they believed it was placed by Heather's accomplice and ex-boyfriend Jack.

The story then takes place in a clinic of an unknown psychologist who is speaking with Lindsay about the slumber party which will begin hours later. She tell her psychologist that she knows that the party it's a trap against her and the psychologist suggest her to go to the party to face her bullies and show them she isn't afraid of them. The story returns to the slumber party and the group, now with the boys, start playing a game in which a boy take a paper from a bowl and the name of the person in it and the boy go upstairs for seven minutes. One of the boys named Steve take a paper and fakes that it reads "Bethany" when in fact all the papers have the name Lindsay written on them. The pair then go upstairs and Bethany tells Steve to give her a moment to prepare herself. Minutes passed and Steve despaired so he entered the room where he couldn't find the hanged Bethany at the ceiling. He thought she went out of the window so he went out on the roof were he starts feeling dizzy and scared induced by someone unknown who sprayed him with a gas, and then felt of it.

The others downstairs heard the fall but ignore what was, and one of the girls named Elsie says "sounds like somebody's having fun," while eating ice cream. Heather then indirectly called her a pig and Elsie runs away of her. A careless Heather then says that the time is up and now is the turn of Jack. The next scene happen in the bathroom where Elsie is seen after self-inducing herself to vomit because of Heather words and, just before doing it again, a shadow is seen behind her.

Jack is then seen upstairs flirting Lindsay and just before they kissed, Lindsay spotted the hidden camera and take it away while the others were seeing and recording the couple, seconds before the Scarecrow appears behind them. Jack then starts excusing himself and blaming Heather for the prank while the Scarecrow is down the bed and induces Jack with his Fear Gas. Jack freaks out and run away from the Scarecrow, while the later talks to Lindsay about her revenge. The story then moves once again into the clinic of the psychologist Jonathan Crane for a shorty speech of Crane to Lindsay about facing her fears and terminate the sessions.

Batman is rapidly informed by Gordon about a call that came from a boy who told them that the walls were closing and they have to come quickly. Batman and Gordon infer that Jonathan Crane is responsible of the call due to his recent escape from Arkham Asylum. Gordon also tells him that Crane has been practicing his profession.

Back into Heather's house, Scarecrow is seen torturing her and tells Lindsay to do so but she is still without knowing what to do just before Batman breaks into the house with his gas mask and kicks Scarecrow. Scarecrow later breaks his mask with a lamp and sprays him with his Fear Gas. He is about to nail his knife into the scarred Batman but Lindsay then smash him with the camera she took away upstairs.

Joker continues narrating while Lindsay is seen taking an ashamed and reliant Jack to a cemetery before spraying him with the fear gas of Scarecrow, revealing that she planned everything from the beginning and acted innocent to acquire the fear gas from Scarecrow. The Joker is then seen smiling and holding a paper with the word "FIN" written on it.

Retrieved from "https://heykidscomics.fandom.com/wiki/Joker%27s_Asylum:_Scarecrow_Vol_1_1?oldid=1518403"
Community content is available under CC-BY-SA unless otherwise noted.