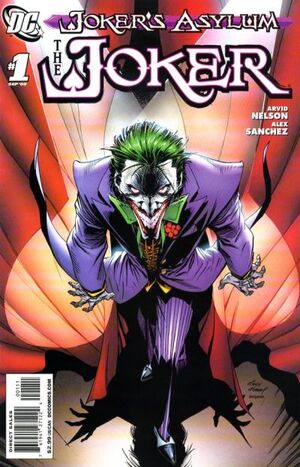 So, who's the real sicko, America? Me, for carrying out this little prank? The producers and executives at the network, who let it all happen-- or is it you people, who mindlessly watched it all on your television sets?

Appearing in "The Joker's Mild!"Edit

Synopsis for "The Joker's Mild!"Edit

The Joker hijacks an on-air game show, posing as its host, and threatens to kill the contestants if they don't answer absurdly difficult questions. Despite immense protests from his assistant "Carol", the show's producer "Dick" insists on keeping the show running live, because the ratings are through the roof. Although the contestants lives are in danger, this does not concern Dick as they have "all signed waivers."
To the surprise of the crowd, after the first contestant "Marty" fails to answer his question correctly, the Joker lets him live, throwing a harmless paper card at him. They are doubly surprised when he lets the other contestant, "Barbara", live as well; squirting her in the face with Ginger-Ale from his corsage.
The Joker then reveals his true motive, he had kept a hidden camera in the Producer's box. To his horror, the Joker plays a tape of Dick's phone conversation with the network executives, and then asks the audience to judge which one of the two of them is really evil.
Batman and the GCPD finally arrive, but the Joker distracts them with a bomb (filled with harmless confetti) and succesfully makes his escape.

Retrieved from "https://heykidscomics.fandom.com/wiki/Joker%27s_Asylum:_The_Joker_Vol_1_1?oldid=1437231"
Community content is available under CC-BY-SA unless otherwise noted.