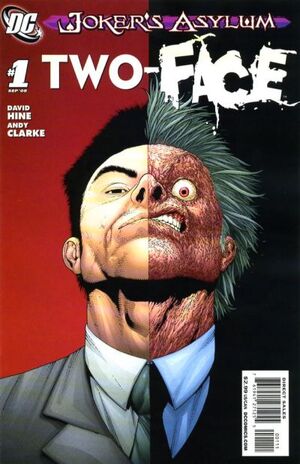 Point is... just indulge me here... if you can make me just like you, then it follows I can make you just like me.

As part of a program set up by the new Arkham Asylum director, Two-Face is scheduled for "peer counseling". He meets a man named Holman Hunt, a volunteer firefighter whose face was scarred similarly to Dent's in a fire, which he was rescued from by Batman. When asked if he would like to continue seeing Holman, Two-Face is allowed one flip of his coin for the decision. It comes up scarred. Several weeks later, Holman and his wife Dana are kidnapped and find themselves in an abandoned theater with a video camera on them.
Two-Face has Dana strapped up to a mechanism that will pour acid over her face, disfiguring and possibly killing her. He also has Batman hanging from the ceiling, chained up and gagged. He hands Holman a gun, and asks him to choose between the two of them. Holman has to kill Batman, or the acid will be released on his wife's face. While Two-Face is lecturing Holman about the differences between the two of them, Holman, refusing to murder the hero who saved his life, simply points his gun at the villain. However, Two-Face reveals Holman's gun had been empty the whole time. Batman was in fact merely one of Two-Face's henchman in disguise, and while shooting him would've yielded no consequences, Holman has just condemned his wife.
Luckily, the actual Batman steps in at the last moment and knocks Two-Face out. But it is revealed that Dana, who had loved Holman even through his disfigurement, had simply wanted him to kill Batman and save her life. Holman is forced to live in a motel for a period because of their argument, and finally finds himself sitting alone in a dark room in front of a mirror with a cellphone, a pistol, and a coin. His intention being to flip, and let the outcome decide whether he should call his wife and beg her forgiveness, or simply blow his own brains out.
The Joker asks the reader to take a coin from their own pocket to flip and decide Holman's fate, and the issue is left unresolved.

Retrieved from "https://heykidscomics.fandom.com/wiki/Joker%27s_Asylum:_Two-Face_Vol_1_1?oldid=1437234"
Community content is available under CC-BY-SA unless otherwise noted.