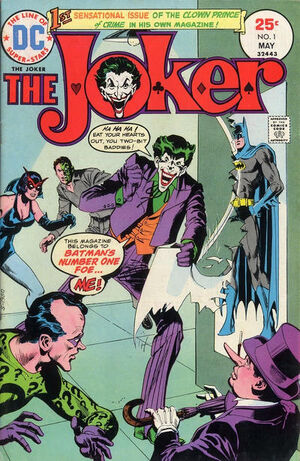 Appearing in "The Joker's Double Jeopardy!"Edit

Synopsis for "The Joker's Double Jeopardy!"Edit

A criminal named Senor Alvarez sneaks into Arkham Asylum and breaks Two-Face free from his cell. The Joker sees them and implores them to set him free as well, but Senor Alvarez has need of a "superior" criminal. Besmirched at such an insult, the Joker arranges for his own escape. Using a helium balloon from a charity donation, the Joker inflates it and floats out of the prison yard.

Later, Senor Alvarez consults with Two-Face in his hotel room. He wants Two-Face to steal a collection of valuable Spanish doubloons. Two-Face flips his special coin and decides to help Alvarez steal the coins.

The Joker and one of his henchmen sneak into the hotel room disguised as room service staff (the Joker is hiding inside the food cart). He throws an acid pie at Alvarez, but Two-Face keeps him at bay by hurling a bowl of pears (pairs) at him. When the Joker finally picks himself up, Two-Face is gone.

As the evening goes on, the Joker tracks Two-Face to the scene where he plans on staging the crime. The two fight one another, but Two-Face proves victorious and ties the Joker to a circular saw table in the basement. He ribs the Joker that the saw is going to cut him into "two". Two-Face leaves the Joker to his fate and stalks off to fetch the doubloons. Fortunately for the Joker, he uses the acid in his lapel flower to weaken the ropes and escapes.

Two-Face steals the coin collection from their display case and retreats back to his hideout where he finds the Joker waiting for him. The Joker distracts Two-Face by throwing clumps of fake hair at him, but Two-Face manages to grab him by the coat. The Joker's coat is treated with an adhesive and Two-Face cannot let go. The two criminals wrestle around until finally knocking each other onto the floor. The Gotham City police department arrives to collect them. Commissioner Gordon reveals that the coins Two-Face stole were counterfeit. Senor Alvarez had previously stolen the real coins prior to his confrontation with the Joker. He is now in police custody.

Retrieved from "https://heykidscomics.fandom.com/wiki/Joker_Vol_1_1?oldid=1724041"
Community content is available under CC-BY-SA unless otherwise noted.