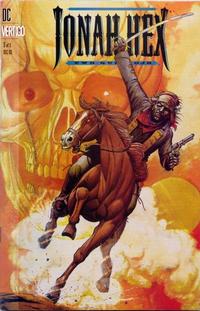 We was in the church choir together. Later, we're gonna have a "Come-to-Jesus" meetin'.

In an unlikely change of events, Hex is now forced to fight alongside Doc "Cross" Williams, the undead Wild Bill Hickok and several retired army soldiers against a raiding party of violent Chiricahua Apaches. Hex befriends one of the soldiers and the two stage their own retreat firing at advancing Apaches.

But as day turns into night, the soldier begins to succumb to the infection that had set in from an Apache's arrow. Unwilling to become a play toy of the Chiricahua, the soldier takes his own life. Taking the Sarge's horse, Hex doubles back towards the initial battle scene.

He finds that Doc Williams has set up camp in the hills. Shortage of food has even prompted him to kill, cook and eat, Ramona – the fat lady of his traveling show. Hex tells Cross that the Apaches are going to see his campfire and come looking for him. Then they will take their time in torturing and slaughtering him. Williams orders Wild Bill to finish Jonah off, but Hex outmaneuvers the zombie and blasts the cap of Hickok's skull clean off. Williams begins to get scared, and pleads with Jonah to save him. Jonah shoots him once in each knee, and leaves him for the Apaches to find.

Retrieved from "https://heykidscomics.fandom.com/wiki/Jonah_Hex:_Two-Gun_Mojo_Vol_1_5?oldid=1664151"
Community content is available under CC-BY-SA unless otherwise noted.