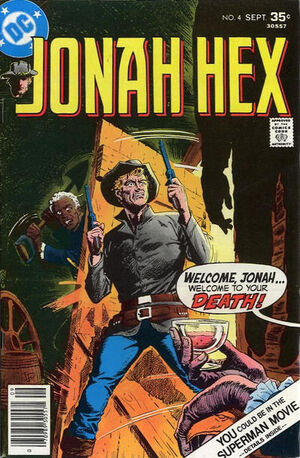 Like that other exalted thespian, John Wilkes Booth, I will engrave my name in American history!

Appearing in "The Day of the Chameleon"Edit

Synopsis for "The Day of the Chameleon"Edit

A criminal calling himself the Chameleon disguises himself as Jonah Hex and robs the Fernwood-Wentworth stagecoach. After robbing the coach, he retreats into the woods where he begins to change his costume. He notices the real Jonah riding along a trail in the lower valley and takes a shot at him. The bullet pierces Jonah's side, unseating him from his horse.

A woman named Joanna Mosby finds Hex and brings him back to her farmhouse. She nurses him back to health and begins to express amorous feelings towards him. Jonah reciprocates, but warns her that there is a warrant out for his arrest. A man named Ned Landon had framed Jonah for three murders, and he needs to get back on the road if he is to ever clear his name.

Meanwhile, the Chameleon disguises himself as a one-legged veteran and arrives at Joanna's doorstep. He asks her for food and water and uses the opportunity to surreptitiously plant the stagecoach loot inside of the house. After thanking Joanna for the food, he travels to the local Sheriff's office and tells him that he saw Jonah Hex with the stolen money at the Mosby farm.

The Sheriff and his deputies ride out to Joanna's place and raid the farmhouse. Jonah manages to escape out the back and climbs up onto the roof. He leaps down on top of one of the deputies and steals his horse.

Jonah rides to the rancher home of his nemesis Quentin Turnbull. Turnbull reveals that he hired Ned Landon to frame Jonah out of revenge for destroying the life of his son. He further reveals that he also hired the Chameleon to stage false crimes in order to implicate Jonah even further. Turnbull knows that Joanna Mosby is a witness and plans on having her killed. Before Jonah can react, Turnbull's servant, Solomon, smashes him across the back of the skull with a shovel, knocking him out.

When Jonah comes to, he races back to the Mosby farm to save Joanna. As he enters the house, he finds that the Chameleon is present and that Joanna is working alongside him. The Chameleon ties Jonah to a chair and then binds Joanna, claiming that he cannot leave any witnesses behind. Joanna apologizes for betraying Jonah, but the bounty hunter has little concern for her feelings right now.

Jonah manages to wrest free of his bonds and fights with the Chameleon. Their struggle starts a fire inside the house and Joanna and Hex escape, leaving the Chameleon trapped in the flames. The Chameleon eventually manages to get out of the house, but his face is now horribly scarred.

Jonah takes his leave of Joanna and heads back out onto the trail.

Retrieved from "https://heykidscomics.fandom.com/wiki/Jonah_Hex_Vol_1_4?oldid=1664205"
Community content is available under CC-BY-SA unless otherwise noted.