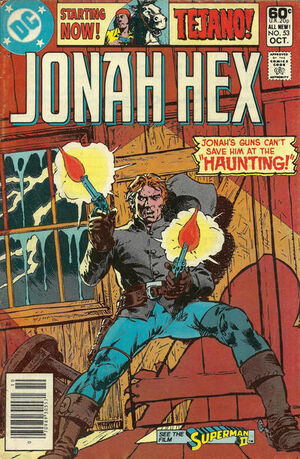 Jonah Hex escaped in last second an explosion, ehisch some goons have set up. After that he goes and hunt down the goons, killed Jason by hanging him up and save Petey Foster.In the end, Ms Foster thank him and reconsidered about her opinion of Jonah.

Later returns to his home where he finds a note from Mei Ling sayind that he left with the baby. In the meantime Mei Ling seaks a selter in the house of Hiram and Ruth. Hex in the hand he was drunked and started to watch illusions from ghosts of the past.

The next mornig Jonah has left the town and went back to bounty huning.

A group Texas' rangers called Tejano are pursuaded by group of Cumanche warriors. After abrief fight they Comache retreat. In a short brief we learn that Sam Houston has give them orders to break the negotiations of General Rojas with the Comache. After the fight they camped near a route point for the Comache village. But Kerker has slept on his watch witch in result lead to an attack from generals soldiers, the death of the other three rangers (including Kerker) and the capture of Antonio Ramirez

Retrieved from "https://heykidscomics.fandom.com/wiki/Jonah_Hex_Vol_1_53?oldid=1437169"
Community content is available under CC-BY-SA unless otherwise noted.