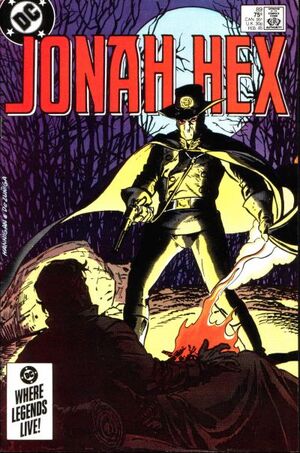 One more day locked up inside this here roomin' house with nobody but thet female Simon Legree fer company - an' ah'll be ripe fer an extended stay in some booby-hatch!

Jonah Hex awakens in a room at Mrs. Crowley's Boarding House. Doctor Bierstein is present and treats him for the gunshot wound received by Emmylou Hartley. Bierstein puts Jonah on a strict diet and tells him to stay away from liquor, smoking and strenuous exercise. As day turns into night, Jonah can no longer stand being cooped up. He ties a bed sheet to his bedpost and shimmies outside the boarding house.

Jonah goes into town and stops at a saloon for some spicy food and whiskey. A man named Quaid decides to interrupt his meal, and begins insulting Jonah’s physical features. Jonah pulls out his six-shooter, but Mrs. Crowley enters the saloon and tells Jonah to get back to the boarding house. Sheepishly, he obeys.

Meanwhile at the Diamond Horseshow Saloon, Adrian Sterling continues to serve drinks under the alias of Temple Starr. A drunken patron named Kenny attempts to force himself upon her, but fortunately for Adrian, a gentleman named Mister Erdnase intervenes on her behalf.

Later, Jeremy Ashford, the new Gray Ghost tracks Jonah Hex to Crowley's Boarding House. He is determined to kill him for the death of his father. As he approaches the front stoop, Jonah dives on top of him, pushing Jeremy out of the way of a sniper's bullet. He then runs across the street and guns down the nameless would-be killer. Jeremy, owing his life to Hex, is now very conflicted about killing him. Mrs. Crowley offers Jeremy a room at the boarding house.

The following day, Jeremy decides to go through with his revenge plot and face Hex like a man. He meets him on a swing set outside of the boarding house and points a gun at his face. Hex convinces Jeremy that taking another person's life is not in the boy's nature and refuses to back down despite facing the business end of a gun. Jeremy lowers his arm and goes back inside. He walks up to his room, places his pistol to his temple and fires.

Retrieved from "https://heykidscomics.fandom.com/wiki/Jonah_Hex_Vol_1_89?oldid=1664131"
Community content is available under CC-BY-SA unless otherwise noted.