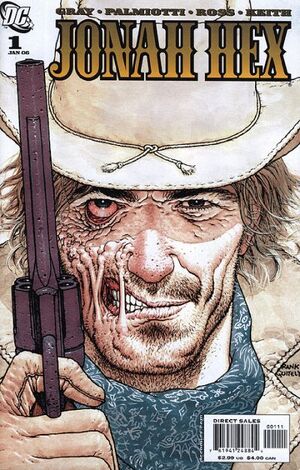 Normally I'd hang you. But I figure your actions warrant something really cruel and unusual.

Appearing in "Giving the Devil His Due"Edit

Synopsis for "Giving the Devil His Due"Edit

Bounty hunter Jonah Hex has a shoot-out with a fellow hunter named James Ronnie. He guns Ronnie down for the unnecessary murder of an Apache woman. Afterwards, he rides on until he arrives at the Foster estate in Chesterton. Johshua Foster hires Jonah to find his missing son, Jacob. Jacob has been missing for several weeks, but so far no one has issued any ransom demands. Hex accepts the job, but warns Foster that his son may very well be dead.

Jonah tracks the boy to a carnival side show run by Victor Romanoff. Romanoff takes in young boys and trains him to fight against starving dogs in his pit fights. Young Jacob is one of Romanoff's star attractions and is billed under the name, Little Devil. As Jonah investigates further, he learns that the boy is rabid and slowly dying. He decides to put him out of his misery by smothering him with a pillow.

He then apprehends Victor Romanoff and tosses him into the pit arena. He covers him with a bucket of pig's blood and sets the snarling pit bulls after him. Afterwards, Jonah returns to the Foster estate and tells Joshua Foster that his son is dead, but he died like a man. He doesn’t tell him that he ended the boy's life.

Retrieved from "https://heykidscomics.fandom.com/wiki/Jonah_Hex_Vol_2_1?oldid=1437209"
Community content is available under CC-BY-SA unless otherwise noted.