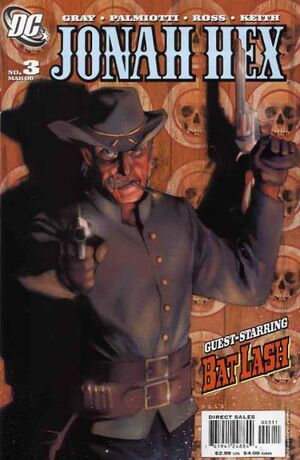 So tell me, mister. I'm curious. Do you perform the service of tumblin' over waterfalls in a coffin for your own amusement or is there a payin' audience hidden somewhere?

Appearing in "Eye For an Eye"Edit

Synopsis for "Eye For an Eye"Edit

Jonah Hex comes across the slaughter of a train of stagecoaches at Two Pines. Arrows in the ground make it look as though Indians are responsible. Hex rides on and comes across a homestead, where three men are about to kill the family that resides there so there are no witnesses to reveal that it was in fact these men responsible for the slaughter at Two Pines. Hex tells the men that that an Apache war party is approaching and that they will have to make a stand at the homestead. While the three men are considering this, Jonah Hex shoots them dead.

Hex rides into town with the family and the bodies of the three dead men. There, the family testifies to the sheriff that the dead men were responsible for the slaughter at Two Pines and that Hex saved their lives by killing the men. Hex is thrown in jail because the sheriff doesn't trust him and says he could have coerced the family into testifying on his behalf. Once imprisoned, Hex discovers that one of the men he killed is actually the brother of the sheriff and the sheriff is only interested in revenge.

Hex is put into a coffin and dumped in a river which he rides over a waterfall. The fall breaks the coffin and Hex swims to shore, where he meets Bat Lash. After some discussion, Hex and Lash discover that they have been hunting the same group of men. Lash suggests they ride back into the town of Kent and settle things for good.

Bat Lash is playing poker with some of the townsfolk in Kent when he is accused of cheating. Naturally, a fight breaks out between the two men. The sheriff turns up at the saloon and arrests Bat Lash. When he returns to the jail with Bat Lash, he finds Hex waiting for him. While Hex holds a gun on the sheriff and his men, Bat Lash relieves them of their weapons. Hex tells Bat Lash that he will be taking the sheriff with him. Bat Lash can take the deputies and see that they answer to justice. Lash tells Hex this doesn't sit right with him, but he doesn't stop Hex either.

Hex rides out into Apache Country with the sheriff. Hex leaves the sheriff with the Apaches he and his brother have been framing for killings and other injustices. The Apaches scalp the sheriff and Hex goes on his way.

Retrieved from "https://heykidscomics.fandom.com/wiki/Jonah_Hex_Vol_2_3?oldid=1437211"
Community content is available under CC-BY-SA unless otherwise noted.