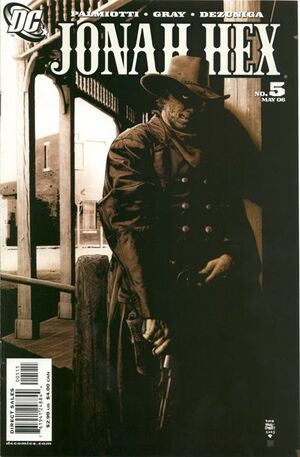 I ain't gonna barter or negotiate. All conversation is gonna be handled with bullets.

Appearing in "Christmas With the Outlaws"Edit

Synopsis for "Christmas With the Outlaws"Edit

Jonah Hex has captured a train robber by the name of Mike Harley. Hex and Harley wait at the train depot for the Texas Rangers to arrive and collect Harley. While they are holed up in the depot, some of Harley's men show up to free him. The daughter of the depot's owner, Lula, is about to force Hex and Harley out of the depot at gunpoint when one of Harley's men comes through the door and reflexively, she shoots him, sparking a gunfight.

Frank Denson and his men show up and kill Harley's men. Denson wants revenge on Harley for killing his younger brother. He tells Hex to send Harley out and no harm will come to Hex or the others. Hex, of course, is not about to give up his bounty. Denson sets fire to the depot and Hex frees Harley and gives him a gun to help fight Denson and his men. Hex and Harley successfully fight off Denson and his men, but the depot is destroyed. When the rangers turn up and take custody of Harley, they let Harley go, having been bought off.

Ten years later, Harley is robbing one final train with his men before retirement. As the train slows to turn on its tracks, Harley jumps aboard a car. Inside the car is Hex, with a Gatling gun, which he fires at Harley.

Retrieved from "https://heykidscomics.fandom.com/wiki/Jonah_Hex_Vol_2_5?oldid=1437213"
Community content is available under CC-BY-SA unless otherwise noted.