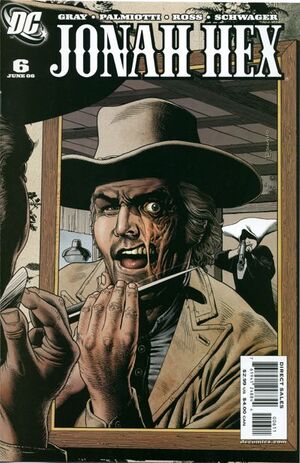 Appearing in "Goin' Back to Texas in a Box"Edit

Synopsis for "Goin' Back to Texas in a Box"Edit

Jonah Hex rides into the town of Salvation carrying a man with plague on the back of his horse. At the local saloon and inn, a whore named Lilly comes up to his room and tries to get him to lay with her. Then a nun comes into the room, pointing a shotgun at Hex and tells Hex to leave town quickly. It turns out that the nun, Evelyn, and Hex know each other. Lilly runs and tells the other nuns that Hex knows the nun they sent to bring him back to them for "inspection" and they rush to the room and capture Hex. Lilly also claims that Evelyn tried to sleep with Hex.

Hex and Evelyn are tied to a stake in the middle of town, where Sister Agatha, who runs the town of Salvation will pass judgment upon them. Sister Agatha comes forth and judges Hex and Evelyn as heathens who must be purged of their sin with fire. It is then that Hex recognizes Sister Agatha as fugitive Mary A. Norton, but he is gagged and cannot reveal this. Just as Sister Agatha sets the stake alight, Apache Indians attack the town.

Hex takes the confusion of the fight as opportunity to escape from the stake, going after a bucket of water to douse the flames that have begun licking at Evelyn before he can free her. Hex is shot in the shoulder, but manages to douse some of the flames with a bucket of water and pulls her free, beating out the remaining flames. Dying, Evelyn looks much like Hex now, with a burned face and lower body. Hex tells her that she is still beautiful and they kiss one last time before an Apache arrow gives Evelyn a quick death.

Hex kills the Apache and goes on a rampage, killing anyone who raises a gun or a bow in his direction. He then throws Sister Agatha onto the street of Salvation and holds up a wanted poster with her picture and real name on it. He then says to the Apache in their own language that they fought well today and should collect their dead and leave. They do so. During Hex's speech, Agatha has drawn a knife and now she stabs Hex with it and runs away. She doesn't get very far before the town whore shoots her. Hex tells the Lilly to meet him in the cemetery, because she'll be digging a grave for Evelyn with her hands.

Retrieved from "https://heykidscomics.fandom.com/wiki/Jonah_Hex_Vol_2_6?oldid=1437214"
Community content is available under CC-BY-SA unless otherwise noted.