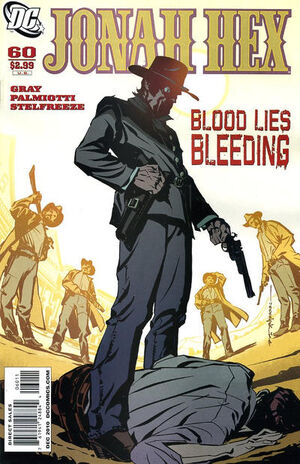 Don’t worry. Me an trouble… We go way back.

After Jonah Hex wins some money gambling with her father, Mae Tines tries to get it back. However, it’s just a set-up ‘cuz Rusty Davis lost some money gambling, too. When a gunfight breaks out, Jonah shows Rusty mercy and leaves him with only a broken hand. Rusty swears that vengeance will be had when his brothers return to town. After his brothers return to town, a wanted criminal runs out and guns down two of them, he is then shot dead. Hex comes out and is blamed for the whole mess. He shoots up the bunch, leaving them dead, except Rusty, who looses his other hands and once again swears vengeance.

Retrieved from "https://heykidscomics.fandom.com/wiki/Jonah_Hex_Vol_2_60?oldid=1437296"
Community content is available under CC-BY-SA unless otherwise noted.