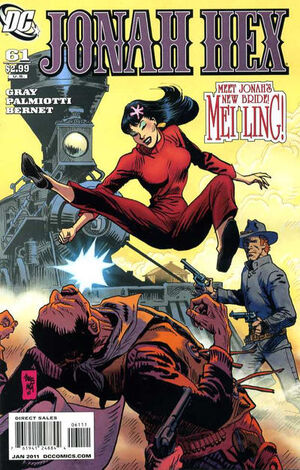 Yes, but we’re married now. I can keep trouble away.

Jonah Hex and his wife, Mei Ling Hex, make a stop-over in a town and face racism towards Mei Ling as they check into a motel. Later, when Jonah heads to the bar alone, he hears more slander, and a fight is about to ensue when Mei Ling arrives. Mei Ling teaches Jonah something new about herself – she can handle her own – as she proceeds to give the brigands a beat-down! Jonah and Mei Ling then have an argument over which one of them should protect her honor. The next morning, Mei Ling expresses her concern that Jonah will die, due to his violent career, which Jonah dismisses. Mei Ling implores that Jonah turns his back from violence, which Jonah , in a way, concedes to. As the pair make their way to the train to continue on to Colorado, the ruffians from last night confront them with guns in hand. After much sarcasm, Mei Ling agrees that Jonah can hang up his guns after they get to Colorado. Jonah shows that he is a changed man though and lets them live. The three thugs receive only crippling wounds and Jonah and Mei Ling catch their train.

Retrieved from "https://heykidscomics.fandom.com/wiki/Jonah_Hex_Vol_2_61?oldid=1501030"
Community content is available under CC-BY-SA unless otherwise noted.