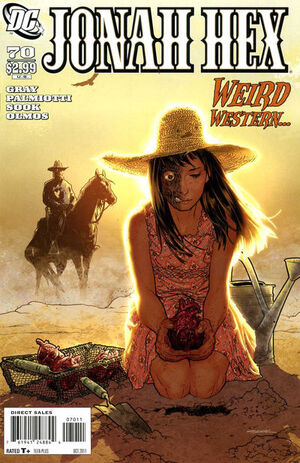 You said it yourself, Jonah, and I quote, “Lord only knows how an ornery cuss like me ever managed tuh live tuh be sixty-six years old.”

An aging Jonah Hex is shot and killed by George Barrow, a man who sought revenge. As he lays there dying, he sees a vision of Jeb Turnbull, who sends him onto as tour of his life…. Only it turns out, this was all just a vision of the future, after he had been shot by the Barrow Gang. Partially recovered, Jonah rides off, figuring he’ll catch up with the Barrow Gang eventually.

Retrieved from "https://heykidscomics.fandom.com/wiki/Jonah_Hex_Vol_2_70?oldid=1501033"
Community content is available under CC-BY-SA unless otherwise noted.