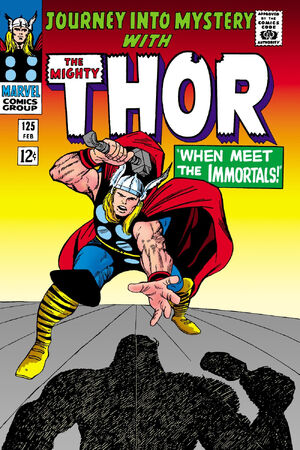 Appearing in "When Meet the Immortals!"Edit

Synopsis for "When Meet the Immortals!"Edit

Synopsis for "Tales of Asgard: The Queen Commands!"Edit

The Flying Trolls of Ula attacking Thor's ship, Thor, Balder and the Warriors Three lead the crew in a counter attack to defend their ship from the looting trolls.

As the battle rages, Loki, Magrat, and Kroda go below the ship to gather materials for a potion which Loki unleashes into the air that poisons the Trolls, causing the majority of their numbers to fall dead out of the sky. With the battle over, Loki takes all the credit and gloats about being able to stop the horde before Thor could.

Loki's boasts are short lived however, when two of the surviving Trolls capture him and carry him away to the Hive of Stone. Thor in turn, tells his crew that the kidnapping of Loki was an attack on them all, and orders them to prepare for battle. While inside the Hive, Ula has anticipated this move and orders her men to prepare a fitting welcome for the sons of Odin.

Retrieved from "https://heykidscomics.fandom.com/wiki/Journey_into_Mystery_Vol_1_125?oldid=1694914"
Community content is available under CC-BY-SA unless otherwise noted.