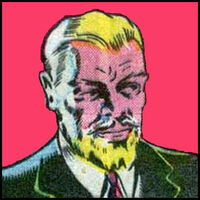 The Judge was thought to be a respectable man in the small town of Doughty's Island. However, he was somewhat of a pirate, and would send out his henchmen to steal from ships that were about to dock on the tiny island. On one of those ships was Barbara Sutton's two suitors — Joe Strong and Matthew Burland. Both men captured the Judge and he went to prison. His present whereabouts is unknown.

Retrieved from "https://heykidscomics.fandom.com/wiki/Judge_(Earth-MLJ)?oldid=1577338"
Community content is available under CC-BY-SA unless otherwise noted.