Part of the 'Eighth Day' event 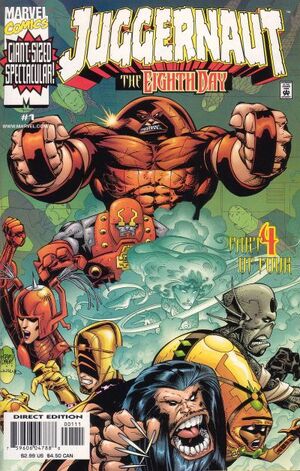 Appearing in "Eight is Enough"Edit

"THE EIGHTH DAY" PART 4 (OF 4) cover by adam kubert joe casey/Terry shemaker ? THE SCOOP: Seven beings with the power of the Juggernaut are invading Earth! Can even the combined might of Thor, Iron Man and Spider-Man stop them? ? THE STORY: All-out war explodes in the middle of Manhattan as Conquest, Stonecutter, Bedlam, Inferno, Tempest, Decay and Carnivore make their big move! What is the God-Machine? What is the Wager of the Octessence?and what will it do to the world? What is the truth behind the Juggernaut's purpose? And after Cain Marko faces the truth, will he fight alongside our heroes to save the Earth?or will he unite with his newfound allies? The Marvel Universe gains a new pantheon of evil (and events for AVENGERS #25 are set into motion) as writer Joe Casey concludes the latest and greatest Marvel event with a big ol' bang! ? THE FORMAT: 48-page one-shot." Cover price $2.99.

Retrieved from "https://heykidscomics.fandom.com/wiki/Juggernaut_Vol_2_1?oldid=1765149"
Community content is available under CC-BY-SA unless otherwise noted.