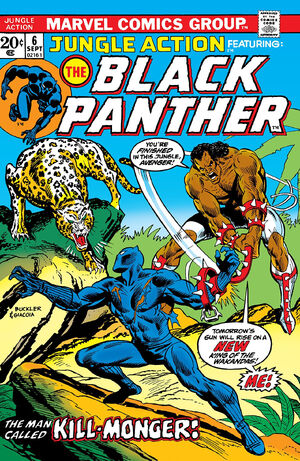 T'Challa returns to Wakanda to find his homeland threatened by Erik Killmonger. Killmonger had been ravaging villages to attract the Black Panther's attention. When confronted by T'Challa, Killmonger dismisses the African Prince, having T'Challa fight with his leopard "Preyy". When T'Challa stops the leopard by apparently snapping its jaw, Killmonger finishes off a fatigued T'Challa and throws him over a waterfall. To be Continued...'

Appearing in "Map of the Land of Wakanda"Edit

Synopsis for "Map of the Land of Wakanda"Edit

A map of Wakanda as well as the central city of Panther Island.

Retrieved from "https://heykidscomics.fandom.com/wiki/Jungle_Action_Vol_2_6?oldid=1438951"
Community content is available under CC-BY-SA unless otherwise noted.