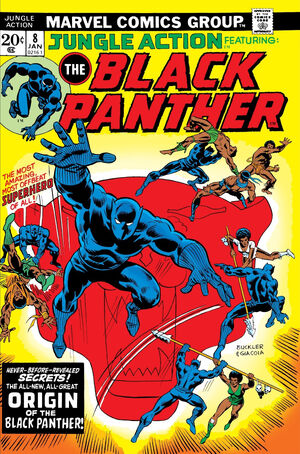 A day of reckoning is coming my chieftain ... one you'll not be able to turn away from!

Appearing in "Malice By Crimson Moonlight"Edit

Synopsis for "Malice By Crimson Moonlight"Edit

Killraven's female assassin Malice tries to liberate her kidnapped co-conspirator Venomm (who was captured last issue). Despite a heated battle with the Black Panther and his inner cirlce, Malice is unsuccessful. She escapes into the jungle destined to return again.

Reprints previous clip art of the Black Panther and a new one from Rich Buckler and Klaus Janson. Reprinted art is from Avengers 358, Daredevil #52, Hulk #128, and Fantastic Four #52.

Retrieved from "https://heykidscomics.fandom.com/wiki/Jungle_Action_Vol_2_8?oldid=1499194"
Community content is available under CC-BY-SA unless otherwise noted.