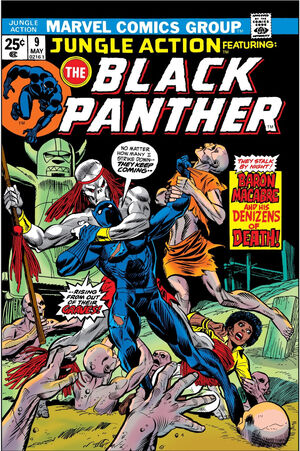 I feel less like a person every day I'm here. I'm more like a symbol to your people... a symbol of everything they've come to hate over the years.

Appearing in "But Now the Spears Are Broken"Edit


Synopsis for "But Now the Spears Are Broken"Edit

T'Challa encounters another minion of Erik Killmonger, Baron Macabre. This villain summons his servants up from the ground, apparently from the dead. T'Challa escapes their trap. However, upon his return to his palace, he finds that his romantic interest Monica Lynne has been accused of killing his royal officer Zatama! To Be Continued!

Retrieved from "https://heykidscomics.fandom.com/wiki/Jungle_Action_Vol_2_9?oldid=1543395"
Community content is available under CC-BY-SA unless otherwise noted.