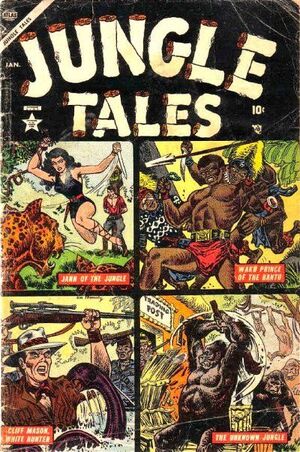 Appearing in "The Screaming Terror!"Edit

Synopsis for "The Screaming Terror!"Edit

Pat Mahoney has Jann helping him with his latest documentary filming of a local tribe when they notice that something is frightening the local animals, causing them to stampede. Jann pulls Pat out of the path of charging gorillas and goes off to try and find the source of the disturbance. Pat finds it instead when he stumbles upon a massive mastodon skeleton that appears to be moving on its own. The creature grabs him up in its trunk, and Pat's screams alert Jann to his troubles.

Appearing in "Vengeance of the Fire God!"Edit

Synopsis for "Vengeance of the Fire God!"Edit

Fires are ravaging across the jungles where Waku and his people live. Waku assures his people that it is the work of their fire god and that if they remain brave the flames will not hurt them. The Bantu people question Waku's words, all except his close friend Jobu who trusts him completely. Waku wins the confidence of his people when the fire dies shortly thereafter without harming any of the tribe. When a herd of rampaging elephants come after them, Waku has his people trick the large beasts into running off a cliff. In the aftermath, the elder Gukai warns Waku that their people will feel the wrath of the fire god.

The Bantu people return to their homes and soon after find that they have lost control over fire, as flints refuse to light, cooking burns and the eternal flame goes out, seemingly proving Gukai's prophecy. The Bantu people are angry and demand that Waku step down as they have been convinced that the fire god is not happy with his leadership. Seeking conference with Jobu, Waku agrees to step down as leader of the tribe, placing Jobu as his replacement.

Lalei expresses her upset that her lover Waku has been ousted as leader of the tribe, but Waku believes that this is but a trail to prove that he is worthy of leading his people. Soon after, things seemingly return to normal, making it appear as though the fire god was indeed mad at Waku. However that night, Waku spies someone starting up the eternal flame -- something that is never done by mortal hands -- and attacks the person responsible. To Waku's surprise the man turns out to be Jobu. Jobu explains that he sought to take control of the tribe, orchestrating things to make it look as though the fire gods were mad at Waku so he could take his place.

In order to eliminate Waku, Jobu unleashes a cage full of leopards that attack the warrior. Waku is outnumbered, but still stands his ground when suddenly the grass in front of him sets on fire and burns the leopards alive. With the fight now equal, Waku challenges Jobu to fight one-on-one. However, Jobu attempts to flee the scene, but trips and falls on his own knife, fatally stabbing himself. Suddenly in the flames the fire god appears before Waku and informs the tribesman that he has proved himself worthy to lead his people. When Waku explains what happened to his people he is welcomed back as leader.

Cliff Mason is hunting through the jungle to find a tiger that has been attacking local natives. Following the beasts tracks he soon finds a group of tigers and is shocked to see one of them managed to steal his jacket and the rest are taking in his scent. As the tigers stalk him, Mason flees deeper into the jungle until he comes across a local tribe and asks them for help.

The tribes people are surprised to find Cliff Mason running in fear, pointing out that he who runs in fear will be finished in the jungle and that those who live in fear will not be helped by the tribe. Accepting their words, Mason goes back out into the jungle to face the tigers alone.

Mason begins shooting down the tigers, however as they begin to get too close, the tribes people come to his aid, throwing spears. As Cliff keeps shooting the combined effort of his gun and the native spears wipe out the rest of the tigers save one. When it pounces on Cliff he tries to fend it off with his bare hands, but he is saved when a native jumps on the creature and slits its throat, saving his life. Cliff learns that the tribe only decided to come and help Cliff and save his life after he proven he could face his death with bravery.

Retrieved from "https://heykidscomics.fandom.com/wiki/Jungle_Tales_Vol_1_3?oldid=1438993"
Community content is available under CC-BY-SA unless otherwise noted.