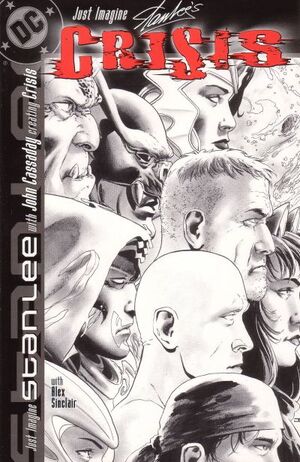 Appearing in "Part One: Crisis J.L.A."Edit

Synopsis for "Part One: Crisis J.L.A."Edit

When one of the Inca Hawk Runes is stolen, Wonder Woman summons all of Earth's new heroes. Sandman arrives with Darrk's body, and warns them of the coming of Darrk's master: a being called Crisis. Crisis arrives on Earth, and only the Justice League can stop him... or could, if there weren't a traitor in their ranks.

Retrieved from "https://heykidscomics.fandom.com/wiki/Just_Imagine:_Crisis_Vol_1_1?oldid=1437862"
Community content is available under CC-BY-SA unless otherwise noted.