Start a Wiki
Part of the 'Brightest Day' event 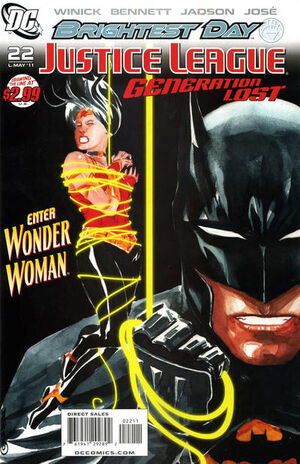 That is an OMAC invasion. And I would imagine-- they are coming for you.

Blue Beetle is confused: one moment, he's trying to run from Max Lord, the next the JLI are cheering, exclaiming that he was alive. After getting them to calm down and setting him down so he can talk to the Scarab, he reveals that he was shot, but the Scarab was able to reinforce his head to prevent the bullet from entering, then put him into stasis to heal him. But, that wasn't the big thing - he hacked into Max's files and realized part of the man's plans. In Checkmate HQ, Max decides to go ahead with his plans, despite Ivo's worries.

Jaime reveals, to the shock of the JLI, that their hunt for Max ended up leading to Checkmate's discredit and, because of it, Max now has Checkmate itself. When Booster asks about another plan, Power Girl arrives with Batman, who wants to hear the plan himself. At Checkmate HQ, the machine is activated, but Ivo attempts to shut it down after the incredible rush of power hits, forcing Max to stop him.

Jaime reveals that, with every moment Checkmate was discredited, each cell was running various tests. Batman figures out he's building something. Jaime reveals that it's an android designed to do one thing: kill Wonder Woman. When Power Girl asks who Wonder Woman was, Rocket Red decides to show everyone himself. Batman reveals he knows where she is and who she is, saying that the White Lantern Power Battery restored his memory.

In New York, Batman and Booster Gold confront Wonder Woman and attempt to get her to safety, though she remains skeptical, especially after noticing the rest of the JLI hiding. This is answered when, all across the world, the OMACs are reactivated and descend on the team.

Retrieved from "https://heykidscomics.fandom.com/wiki/Justice_League:_Generation_Lost_Vol_1_22?oldid=1499082"
Community content is available under CC-BY-SA unless otherwise noted.