Justice League: Origin is a rebooted origin story of the Justice League of America presented during The New 52, establishing the team's history following Flashpoint. It's the debut arc of Geoff Johns and Jim Lee on their 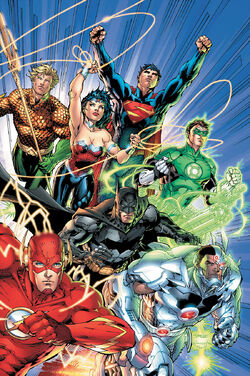 Justice League: Origin is a rebooted origin story of the Justice League of America presented during The New 52, establishing the team's history following Flashpoint. It's the debut arc of Geoff Johns and Jim Lee on their all-new Justice League volume.

Batman meets Green Lantern for the first time when they team up to track a rogue Parademon across Gotham City. Lantern is surprised to learn that Batman does not have powers, and they don't initially get along well. The monster blows itself up with a Father Box, and they decide to investigate the extra-terrestrial lead through Superman.[1]

Superman attacks Batman and Green Lantern, believing them to be threats. Lantern calls in The Flash to help them, and they continue to fight until Batman makes them realize they're on the same side. Regrouping, the four men puzzle over the Father Box until a Boom tube explodes and releases an army of Parademons. High school athlete Vic Stone is caught in a similar explosion at S.T.A.R. Labs.[2]

Wonder Woman leaves her military escort at the White House to join their battle, despite the protests of her government-appointed liaison Steve Trevor. Aquaman appears when they near the ocean, and reveals that monsters have been attacking him as well. Silas Stone saves his son's life by turning him into a Cyborg.[3]

Aquaman demonstrates his capabilities, and they realize that the Parademons are dragging all humans to the top of a giant alien spire. Cyborg begins trying to control his powers, and meets the team while escaping from his father. Darkseid finally descends to Earth, and reveals himself as the villain behind their invasion.[4]

Darkseid fires his Omega Beams, and the Flash outraces them but Superman gets hit and carried to the spire. Green Lantern almost dies repeatedly attacking the unflinching Darkseid, until Batman makes him reconsider his efforts. Revealing his secret identity as Bruce Wayne, he explains that they need to start fighting as a team instead of a group of individuals. Leaving the others to distract Darkseid while he looks for Superman, Batman walks through a portal to Apokolips.[5]

The heroes finally start acting like a team when they fight Darkseid together. Batman rescues Superman from torture at the hands of DeSaad and Steppenwolf, bringing him back to Earth. Superman is able to take on Darkseid, and throws him back through the portal while Cyborg uses his empathic technology to close it. Darkseid swears that he will return. Finally they are rewarded public recognition, and Batman insists that staying a team is necessary for them to maintain approval. The President publicly acknowledges them for saving the world in front of the Capitol Building, and the Flash announces that they will be called the Super Seven.[6]

Retrieved from "https://heykidscomics.fandom.com/wiki/Justice_League:_Origin?oldid=1516437"
Community content is available under CC-BY-SA unless otherwise noted.