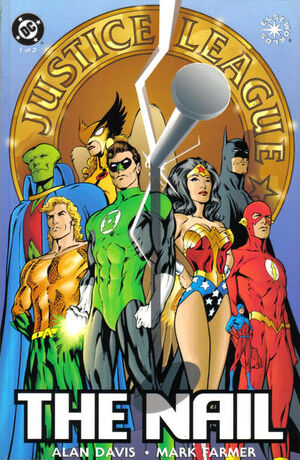 Jonathan and Martha Kent are delayed from traveling to Smallville due to a flat tire to their pickup truck caused by a nail. The couple decide to postpone their trip. As they return inside their home, a object streaks across the sky.

Twenty-four years later, a great degree of xenophobia for the "metahumans," fueled by anti-metahuman propaganda from Perry White, backed by Metropolis mayor Lex Luthor, who gained points for his actions in establishing a high-tech police force for Metropolis in its absence of a superpowered protector, and the bitter rantings of former hero Oliver Queen, now a paraplegic after sustaining injuries in a battle with Amazo (which also resulted in the death of Hawkman). Queen claims that the JLA and all metahumans are aliens secretly conspiring against humanity, an attitude that is far from helped given that Flash, Wonder Woman and Atom are the only League members who can be 'confirmed' to be human, particularly with Green Lantern's allegiance to an interstellar power and the mystery of Batman's true nature.

The League equally perturbed of Oliver's slant and the general metahuman xenophobia. However, the growing fear also cause some sense of division within the JLA. Green Lantern finds a solution to the negative media coverage by gaining the aid of Pulitzer Prize-winning journalist Lois Lane, who will agree in representing them. Batman, on the other hand, doesn't agree in cooperating with how the news treats him and other metahuman and focus on his war on crime. The JLA then postulate on a possible conspiracy behind the anti-metahuman movement. Although there aren't any evidence to provide the existence of an orchestrated hate campaign. Batman is then called by Robin, informing him that the Joker has taken over Arkham Asylum. As Batman left for Gotham, his departure effectively ends the JLA's discussion.

Meanwhile, the Outsiders, led by Black Canary - who have since resigned from the JLA following the Amazo incident - are trying to find a missing Metamorpho. Their leads track them to the Arctic Circle where Metamorpho and his wife Sapphire were assisting Simon Stagg with polar research.

In Midway City, The Chief shared his concerns on the anti-metahuman movement to the Doom Patrol as he relates to their foes, the Brotherhood of Evil, have been apparently eliminated in ties to the movement. Suddenly, the human members of the Doom Patrol are knocked out by gas from a gas-based metahuman, and the rest are then promptly subdued and capture by an unknown men in power armors.

At Arkham, a super-powered Joker liberates the inmates by using acquired alien gauntlets that generate energy blasts. The Asylum is cover in an impenetrable force-field that the police cannot enter; however, only Batman, Batgirl, and Robin are allow in. Batman orders Batgirl and Robin to stay outside as he enters Arkham alone.

On Apokolips, Darkseid and his cohorts examine a destruction to their munition factory after a team of Parademons were traveling to Earth via Boom Tube had caused an explosion which focused back to the factory due to the force-field surrounding Earth. The Apokolipians strongly suspects that the forces of New Genesis are behind this. They interrogate a captured Mr. Miracle and Big Barda, who had been trying to rescue their friends from Granny Goodness' Orphanage. The prisoners tells Darkseid that New Genesis is not behind the Boom Tube accident given Earth was declared neutral territory in the peace treaty between New Genesis and Apokolips. Their assertions are reinforced by Metron, who arrives as an emissary. However, Darkseid attacks Metron and firmly believes that New Genesis is scheming for an invasion of his planet, and declares war on New Genesis.

Back at Arkham, the Joker has been forcing the inmates into a gladiatorial process for his entertainment. Batman fights the Joker, but he is caught and held captive in the Joker's gauntlets. Joker explains to Batman he was able to acquire the gauntlets from powerful allies. Against Batman's orders, Robin and Batgirl enters Arkham and tries to save Batman, but are also easily captured. Joker then tortures and kills Robin and Batgirl, forcing a horrified Batman to watch as he tears them apart. Unfortunately for the Joker, Catwoman sets Batman free by attacking Joker while he is occupied with his torture of the Dark Knight, breaking his concentration. In a fit of grief-induced madness, Batman damages the Joker's gauntlets before he proceeds to kill his enemy on live television by snapping his neck on the roof of Arkham.

Retrieved from "https://heykidscomics.fandom.com/wiki/Justice_League:_The_Nail_Vol_1_1?oldid=1438741"
Community content is available under CC-BY-SA unless otherwise noted.